Out of touch or totally in tune? Monti wants an in/out referendum in the UK 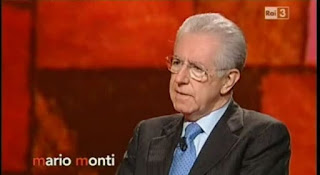 In an interview on Italian TV on his new book, ‘Democracy in Europe’, co-authored together with French MEP Sylvie Goulard, Italian Prime Minister Mario Monti was asked by the host whether Europe has “a British problem”.

“Britain rather considers it a ‘Europe problem’ [Monti laughs, but no-one else in the studio seems to get the sarcasm]. Yes, there is a British problem… [but] I’m one of those who says that Britain has to be kept in the European Union.”

Monti went on to say,

“It is good for Britain to stay in the EU and it is good for the EU that Britain stays in. The euro is a different thing. I’m not sure that, at the moment, it would be good for Britain to have the euro and for the eurozone to have Britain in. But there are aspects of European life that go beyond the euro. The single market, foreign policy, defence policy (one day)…The British can, however, be rather frustrating when they seek, as a condition to stay aboard this big European ship, specific exemptions, specific derogations that would ultimately be equivalent to opening holes in the ship and making it harder to navigate, not to say sink.”

“Now, there are some in Europe who would, after all, feel relieved if Britain were not in. I think some French belong to this category. I am convinced that a compromise with the British has to be sought and, above all, it is necessary that, one day – and I spoke about this with David Cameron last week – the British ask their electorate not, ‘Do you agree with this further change that other [EU] countries want to make’, but ask the fundamental question, ‘Do you want [your country] to remain in the EU?’ I’m sure that, at that point, faced with such an important set of choices – banking interests, financial interests, industrial interests – they [British voters] would immediately say, ‘Yes, please’.”

So Monti has waded into the British referendum debate, effectively calling for an in/out choice. It is perhaps a  bit ironic that an unelected head of an unelected technocratic government chose to comment so explicitly on how other democratic countries ought to involve voters in key decisions. We’ll leave it up to you to decide whether Monti is completely out of the touch with the UK debate or totally on top of it when he calls for a future British referendum on the EU to be a question of “all or nothing”….