The Catalans have voted: for what exactly? 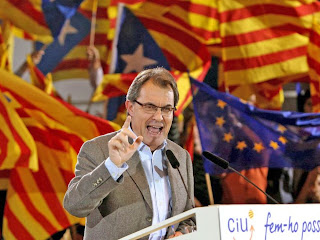 It does not happen very often, but the final result of yesterday’s Catalan elections was almost completely unpredicted by polling. Artur Mas (in the picture) and his centre-right Convergència i Unió (CiU) party were always going to win – and they did so. However, according to most opinion polls, Mas was, at worst, going to consolidate the 62 seats that his party currently holds in the Catalan parliament – but he failed to do so, and by a wide margin.

CiU only secured 50 seats – 18 short of the 68 needed to command an absolute majority. Needless to say, Spanish Prime Minister Mariano Rajoy’s party has immediately described the result as a bofetada (a “slap in the face”) to Artur Mas – claiming he has failed in his attempt to lead Catalonia towards independence.

So have the Catalans suddenly given up on independence? Not quite. The exploit of the left-wing independentist, anti-austerity and anti-monarchic Esquerra Republicana de Catalunya (ERC, Catalan Republican Left) won them 21 seats – eleven more than in the previous elections. Therefore, Mas could certainly try to push ahead with his plans for a referendum on Catalonia’s independence with the support of ERC. 71 votes from a total of 135 seats in the Catalan parliament (without counting the smaller pro-independence parties) is not the “exceptional sovereignist majority” Mas hoped for – but is a majority nonetheless.

This is exactly what the Catalan President noted in his first remarks after the election results were made official yesterday night. He said,

Those who want to abort the [sovereignist] process should take into account that…the sum of political forces in favour of the [Catalans’] right to decide is very much a majority in the parliament.

However, CiU and ERC are hardly natural allies or the makings of a stable and durable coalition. In particular, the two parties clearly do not see eye-to-eye on the need for Catalonia to continue with fiscal consolidation. At this stage, it is difficult to predict how things will evolve within the next few weeks or months. But the following should be kept in mind:

Everything else, at this stage, is far from clear – especially given that the new Catalan government is not yet in place, and forming one may not be the easiest of tasks.