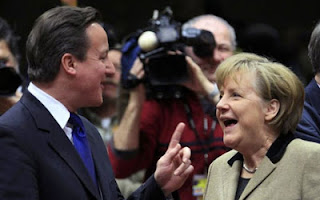 On his Telegraph blog Open Europe’s Mats Persson analyses the breakdown of EU budget talks, see below for the full piece:

As predicted, the talks over the EU’s long-term budget have broken down. What does this mean? In truth is, not that much. Postponing a decision was always the most likely outcome. A new deal will now have to wait until after the December EU summit when leaders will try to hammer out the details involved in a European banking union. On substance, this is a far bigger issue than the EU budget, as it’s breaking new ground and links to the stability of the euro. The EU budget is a maddening legacy issue.

Had Cameron been forced to pull the veto this time around, it would have been a completely different matter.

There will be those on all sides tempted to blame David Cameron for the breakdown in the talks. This is simplistic. As Angela Merkel pointed out at her press conference just now, there were two main groups who disagree — net contributors and net recipients. Within these groups, as Open Europe has consistently highlighted, there are a series of disagreements. From the Danes who want a rebate to Malta who want to be treated as a ‘special’ case. All positions matter since every country has a veto. In total, eleven countries had explicitly threatened to veto the budget in case they couldn’t secure a favourable deal for themselves. Interestingly, France and Germany struggled to reach a common position, with Berlin leaning towards London on several points, including on cutting the EU’s admin spending. So forget the 26 vs. 1 narrative.

Moving forward, David Cameron remains in a very tricky, but far from impossible, position. His negotiation mandate is exceptionally narrow following the Parliamentary vote in which a majority of MPs backed a cut in the EU budget, rather than the freeze Cameron has called for. He also suffers from a major communication error committed early on in the talks. The British Government decided to use the amount of cash that was actually paid out from the EU budget in 2011, €886bn, as its “baseline”. When this figure is extrapolated to the entire seven-year EU budget period, it creates an artificially low figure – far below the “appropriation ceilings” (the maximum amount of cash that can be paid out rather than the actual cash paid out) — meaning that Cameron has to fight seriously hard to live up to the high threshold for a “freeze” that he had set for himself. But if the Government is using the same measure as everyone else – payments appropriations over the full seven years – it is now on way to actually achieve a freeze or even a cut, when compared to the full 2007-2013 EU budget period. So budget period to budget period, the Government is in a pretty good position.

David Cameron had a very solid press conference after the summit – he sounded plausible (which hasn’t always been the case) – but to date, the Government’s communication strategy around the EU budget talks has been pretty appalling. It’s been very difficult to figure out what, exactly, the UK government actually was pushing for, and by focussing on a 2011 real terms payments freeze it may have been a bit too smart for its own good.

The real tragedy with these talks is that no one is actually focussing on the substance of the EU budget. As we have shown – comprehensively – the EU budget is an economic anomaly. It’s not a huge amount of money, but if targeted properly – rather than wasted on economically inactive landowers or recycling regeneration cash – it would make a real difference.

It speaks volumes about the current state of the EU that this budget remains unchanged. That’s not only Cameron’s problem, but also the rest of Europe’s problem.