Britain is not about to get completely stuffed in Europe 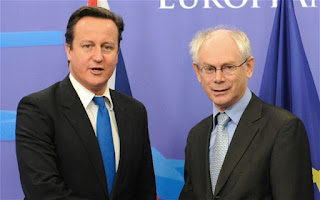 Take a deep breath. Britain is not about to get completely stuffed in Europe.

The FT ran a story the other day claiming that the EU could circumvent the UK’s veto over the EU’s next long-term budget (2014 to 2020) , effectively turning David Cameron into a spectator in the talks and forced to accept spending increases. Stories like these fuel speculation that “Brixit” – the UK leaving the EU – is just around the corner.

But how much of this is actually substance as opposed to noise? The FT story was pretty implausible – ‘circumventing’ the UK’s veto will be very difficult. In case of no agreement before the end of 2013, EU officials could move to roll over the 2013 EU spending ceilings adjusted to inflation with up to 55 individual spending items decided by Qualified Majority Voting (QMV). This would be extremely messy. There’s no way 26 countries would agree amongst themselves to take a common position against Britain on 50+ spending areas – at least eight countries have already threatened to veto the EU budget for different reasons.

But let’s do some war-gaming around EU events this autumn, to see how bad things really are for Cameron.
EU leaders will discuss the long-term EU budget this week, starting tomorrow. There are effectively three possible outcomes from the Brussels summit: a new veto moment for Cameron, a deal or postponing the decision. Though all options are on the table – and a deal this weekend isn’t impossible – the latter remains the most likely.

Following the recent vote in British Parliament, in which a majority of MPs voted for a cut to EU spending rather than a freeze, Cameron can hardly accept the proposals for an increase that are floating around.
But forcing Cameron to veto the EU budget this week could trigger a “perfect” storm not only for Britain, but also the EU as a whole, in which everyone would lose. A new veto would really sour relations between the UK and Europe, and any attempt to try to press ahead without the UK would be met with fury in Westminster as it would effectively involve taxation without representation. Agreement on an EU “banking union” – the far bigger fish to fry as it links with the stability of the euro – would then be much more difficult to reach at the EU December summit, when leaders will hammer out those details.

The UK also has a veto over the banking union. Though it’s currently broadly supportive, should the UK be singled out in EU budget talks, the banking union will be far more difficult to manage in Westminster as every front page in the land will be splashed with “EU stitch-up” headlines. Cameron will come under pressure to pull a second veto over banking union to take back control over events.

EU officials say they have a familiar back-up plan should this happen: ignore Britain. The EU, they say, could press ahead with banking union under so-called “enhanced cooperation”, allowing a limited number of member states to pursue more integration, if not possible at the level of all 27.  But this would trigger a massive crisis as the UK would, for all practical purposes, find itself “not in the euro but run by the euro” – London’s worst nightmare. Legal challenges and massive uncertainty for the eurozone would follow. Britain would also be half-way through the exit door.

Far-fetched? Most certainly. It could happen. But Berlin and Brussels will get cold feet long before it gets to that. The legal foundations of trying to rewrite the role of the ECB, turning it into a bank supervisor, using enhanced cooperation would be so weak that Angela Merkel’s lawyers could well suffer a nervous break-down.

And this also shows that beyond the huffing and puffing – and the indulgence of “isolation” stories – it’s in everyone’s interest to reach a deal. But that’s only with regards to events this autumn of course. There will be plenty more fraught moments to come.