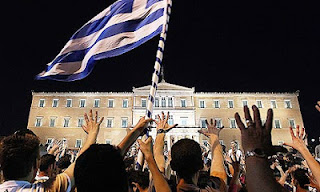 Ahead of today’s meeting of eurozone finance ministers we thought we’d (finally) get round to posting some of our thoughts on the last week’s leaked Troika report on Greece. The report, as may be expected, left much to be desired – and we’re not just talking about the copious glaring gaps where the eurozone and the IMF could not agree (the missing new debt sustainability analysis being the more prominent). The firefighters are fighting amongst themselves as one paper put it.

The report suggests that the cost of providing Greece with a two year bailout extension will be €32.6bn – very much in line with our estimates of between €28.5bn and €39bn. Interestingly, up to €20.3bn of this total is due broader problems with the original bailout programme, with the troika suggesting only €12.4bn will specifically be for the fiscal adjustment. This may not seem like it matters much but it highlights that the financing issues don’t just come from fiscal issues but also low growth, increasing arrears, banking sector problems and more.

Below we list a few other concerns from the report:

– The unemployment figures, as in the recent Greek budget, seem to be hopeless optimistic – potentially more so than before, since the Troika see unemployment in 2014-2016 being 0.4% below where the Greek government does. Elstat (Greek Statistics Agency) put unemployment at 25.4% at the end of August, while the Troika expects it to be 22.4% by the end of the year. A 3% drop in unemployment in a few months? That seems impossible anywhere but particularly in the current Greek economy.

– The report expresses some deep concerns over the banking sector not least the “plummeting” deposits and the likely need to run down capital buffers due to significant levels of bad loans. However, it still concludes current levels of recapitalisation should be sufficient – we’re sceptical.

– Despite, finally cutting defence spending, Greece still spends the third most (as % of GDP) in the EU. This continues to seem an obvious place to make savings, particular with NATO still going strong.

– The collapse in real investment of 40% since 2009 is staggering if not surprising, yet the forecasts for investment both in the troika and budget reports only looks ever more optimistic because of it.

– Government arrears continue to mount up, topping €8bn now. Despite presenting a significant challenge to wind down in the near future, these could also represent a drag on the domestic economy since most of the money is owned to domestic firms.

That is to name but a few from an incomplete report – i.e. there are plenty more to come.

As for the outcome of today’s meeting, we have low expectations as usual. The target is for a political agreement on the releasing the next two tranches of Greek funds (worth €44bn). This doesn’t sound much of a stretch but it will require confirming Greece has completed the necessary ‘prior actions’, as it claims, while the IMF is hesitant to release any more funds until it has settled on a plan which sticks to its view of Greek debt sustainability. The final part will be tricky with the IMF and the eurozone still seemingly someway apart on what they see as sustainable (despite the two of them also being someway apart from the rest of the economic and financial professions).

A deal on how to fund the two year extension in the Greek bailout will likely need another meeting, while the release of funds still has to withstand the hazardous approval process of the German, Dutch and Finnish parliaments.

Expect the debate over the issues above and more to dominate for another few weeks.