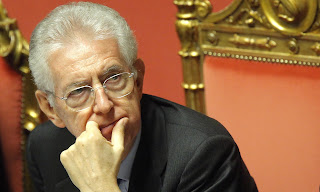 Earlier this year, we looked at what we described as the ‘Mario Monti paradox’ – that is, how surprisingly popular the Yale-educated Italian Prime Minister was, despite being the unelected head of an unelected government of technocrats. We also warned, though, that Monti’s lack of a clear mandate from Italian voters would come back and haunt him once the (badly needed) reforms adopted by his cabinet started to bite.

Well, that moment now seems to have come. According to a new SWG poll, 62% of Italians are against a second mandate for Monti. Even more significantly, trust in the Italian Prime Minister is at 36% – down from 71% when he entered office in November 2011.

With the Italian general elections only a few months away (the latest reports suggest that they could be brought forward to 10 March) these findings complicate things further. None of Italy’s political parties looks set to gather enough support to govern alone. The centre-left Democratic Party is currently ahead in opinion polls, but is likely to win no more than 25-26% of votes.

Furthermore, Italian comedian Beppe Grillo’s Five-Star Movement continues to poll at around 20% and has already ruled itself out of any alliance with ‘establishment parties’. Sure enough, the Grillini will be tough in their opposition to the next government – whatever its political colour. Add that Silvio Berlusconi’s PdL party has also said that it “wouldn’t bet one cent” on a second mandate for Monti, and it really seems that, as the electoral campaign draws closer, no-one wants Il Professore to stay on – except for one or two smaller centre parties.

In other words, Italy is approaching the next general elections with no clear idea of what type of coalition would take over power – provided that Italian political parties are able to form one after the vote. Meanwhile, Italian voters are quite clearly saying that they would not be happy to end with an unelected Prime Minister again. Needless to say, all of this potentially opens for fresh political instability that Italy can ill-afford.