Dieu save the baguette!

Many of you have probably already seen it, but this is the (quite clever) front cover the Economist has chosen to present its special report on France: 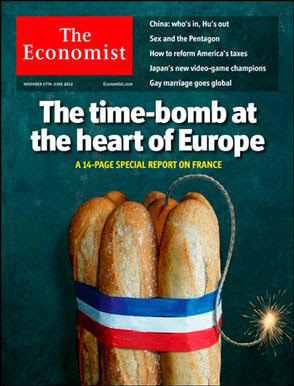 You decide what annoyed the French government the most:

a) ‘Les Anglo-Saxons’ making fun of France’s economic grandeur with their unpleasant sense of humour;
b) The irreverent picture of a bunch of France’s beloved baguettes about to explode;
c) The content of the report.

One thing is certain: the Economist has hardly made any new friends in Paris. Here are some reactions from the French government:

“I can tell you that France is not at all impressed by the excess aimed at selling [more] copies.”

“Honestly, the Economist has never distinguished itself by its sense of self-restraint. It’s the Charlie Hebdo [a well-known French satirical weekly] of the City.”

“[The Economist] should update its software…We borrow money at historically low rates, not to say negative. We have gained this credibility, and it is acknowledged by the markets.”

We expect more reactions to come – and we may also elaborate a bit more on the future of the French economy in the eurozone at some point. For the moment, though, the idea that France should start to be looked at as a potential reason for concern does not sound completely far-fetched.