EU awarded its second Nobel Prize of the year 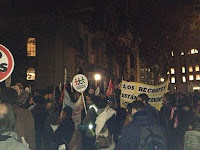 Yesterday, a delegation headed by Bernadette Ségol, Secretary General of the European Trade Union Confederation (ETUC), delivered a ‘Nobel Prize for Austerity’ to the EU – a boomerang with ‘Austerity will come back in your face’ written on it, according to Italian news agency ANSA.

Unsurprisingly, Barroso, Van Rompuy and Schulz weren’t exactly elbowing their way to the front of the queue to pick up the award, which was ultimately handed to EU Social Affairs Commissioner László Andor.

This was the only (relatively) light-hearted moment of a day which saw anti-austerity protests degenerate into violent clashes between demonstrators and the police in Italy, Spain and Portugal – while marches were also staged in several other European countries. Some Spaniards even rallied in Smith Square, London, in front of the European Commission and European Parliament’s offices (see the picture, which was posted on Twitter yesterday evening).

We have stressed on several occasions that these protests are the inevitable consequence of the clash between eurozone membership and national democracy.

While structural reforms and fiscal consolidation are needed for struggling eurozone countries to try to regain competitiveness within the single currency, what the European Commission should be most concerned about is the fact that citizens in the weaker eurozone countries increasingly see the EU (and certain creditor member states) as the cause of their pain.

As we noted in a recent briefing, the average level of trust in the EU in Greece, Spain, Portugal, Ireland and Italy has reached an all-time low. Again, it is impossible to know where the tipping point lies exactly – but the recent episodes seem to confirm that the number of those who see the EU as a positive force is rapidly decreasing.