The spotlight is back on Greece today with the release of the much anticipated Troika report (read our daily press summary or follow us on Twitter for the latest updates), meaning that German Chancellor Angela Merkel’s visit to Portugal has been pushed to the background.

However, clearly not everyone in Portugal is enthusiastic about Merkel’s arrival. After the open letter signed by over 100 academics and intellectuals, arguing that the German Chancellor “has to be considered persona non grata in Portuguese territory”, this is the front page of today’s edition of Portuguese newspaper I Informação, 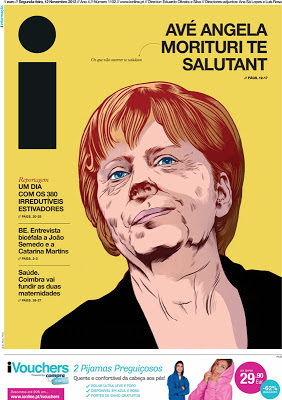 Another Latin expression, this one translates as, “Hail Angela, those who are going to die salute you” – a paraphrase of the famous salute made by gladiators to the Roman Emperor before the fights in the arena started. And another example that tensions can run high in Portugal too – even if the country does not usually receive the same degree of foreign media coverage as Greece or Spain.