Some more (draft) bad news for the Spanish government 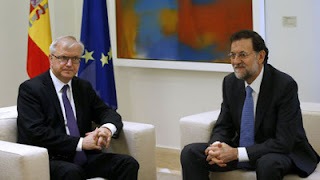 The European Commission is due to unveil its autumn economic forecasts on Friday, but El País has already seen a draft of what the Spanish government is going to be told – and, unsurprisingly, there seems to be no good news coming from Brussels.

Unfortunately for Mariano Rajoy and his cabinet, though, the bad news does not end there. The draft seen by El País also shows that Spain is set to miss all the deficit targets agreed with Brussels until 2014 – and not exactly by a whisker. Worryingly, the Commission believes Spain’s deficit at the end of 2014 will be 5.8% of GDP – with the target set at 2.8%. In other words, Spain looks set to fail to bring its deficit below the threshold of 3% of GDP enshrined in the EU Treaties, even after being granted an extra year to do so.

If confirmed, the Commission’s forecasts will deal another blow to the credibility of the Spanish government – not least because Madrid decided to stick to outdated growth predictions to table its budget for next year, despite the IMF and others clearly warning that the recession was going to be much worse.

The official figures will be out on Friday – and we will post a more comprehensive analysis then.

Given all this then, it is a slightly ironic day for Spanish Finance Minister Luis de Guindos to publish an op-ed in the WSJ under the headline, “Spain’s future is bright. Nobody in the international arena doubts the bold determination of the Spanish government.” These figures suggest differently, and we expect Spain could find an increasingly impatient audience at meetings with other eurozone countries, especially after its decision to block the appointment of Luxembourg’s Yves Mersch to the ECB’s Executive Board.