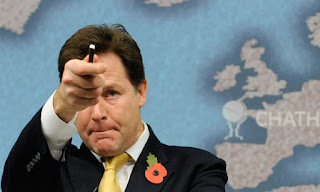 Nick Clegg this morning fell into the usual ‘all or nothing’ fallacy on Europe. He said: ‘As soon as we start talking about repatriation, we descend into the in-versus-out debate.’ But the Deputy Prime Minister is wrong: the in/out debate is already underway, and rather than seek to defend the unpopular status quo, Nick Clegg should back renegotiation as the best option for those who wish to put the UK’s membership on a stable democratic footing.

But instead of attempting to address the causes for the EU’s unpopularity, the inflated budget, democracy deficit and bureaucracy etc. Nick Clegg sought to channel the debate into his own in/out debate where the problems of ‘out’ justify doing nothing about the problems of ‘in’.

Clegg said that UK can either be a full member of the EU or outside, like Norway and Switzerland. He is right that Norway as a member of the EEA does indeed implement a large proportion of EU law over which it has little influence and that Switzerland does not have full access for its services industries. He also pointed out that with no EU deal ‘firms who currently pay no import tariffs on the goods they send to the continent would be faced with taxes of up to 22 per cent’.  It is actually more like 10 per cent but the point is the same. However, protesting that no one is suggesting joining the EEA or not having a free trade deal with the EU is missing the point. Nick Clegg is presenting a false choice.

There is not one standard EU membership. The UK is not in the Schengen travel area, others are. The UK has a different deal on EU crime and police law than Denmark, which is fully opted out. There are neutral states and those involved in EU defence, there is the euro, the list goes on. But for Clegg there are only two types.

‘There’s the core: where the Eurozone countries are now pulling together more closely… Then there is the ring around that… And the outer circle… The UK is in the inner circle – but the terrain is shifting. The core is tightening – to what degree we don’t yet know.’

Clegg believes we should remain ‘a strong UK, influential in Europe’, but does not define what he wants to influence or convincingly explain why we should be in anything beyond the single market and some absolutely vital cross-border measures. Clegg’s reasoning:

‘What kind of club gives you a full pass, with all the perks, but doesn’t expect you to pay the full membership fee or abide by all the rules?’

This is an odd justification for the EU’s Common Agricultural Policy, Common Fisheries Policy, social and employment regulation, wasteful regional policy and unnecessary loss of democratic control. Are these accepted as some bizarre self-imposed flagellation for daring to desire free trade? If so, why not just accept a rise in the EU budget and get on with it? It’s the ‘subscription’ fee after all.

So what should the UK aim for? In a recent paper we set out that for now the UK benefits from being in the EU’s customs union and single market for good and services but that all other areas should be decided on a case by case basis. Is this pick -and-mix EU possible? Yes. The EU, as Clegg acknowledges, is changing. The eurozone is renegotiating its membership terms, and the treaties will need to be revisited sooner or later. This will present the UK with the opportunity to reform its membership terms and put it on a stable democratic foundation in line with public opinion.