About that Spanish bad bank…

The Bank of Spain has just made an announcement regarding the country’s bad bank plan which fleshes out more details of the proposals following the recent consultation period. The press release and presentation are here and here, respectively. 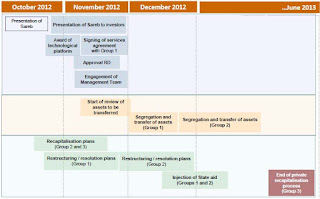 More details are still to come but here are some of our initial thoughts:

– One phrase that caught our eye was this: “The transfer price is not a reference for the valuation of non-transferred bank assets.” According to whom? Surely just asserting that this is not reference for the valuation of assets means nothing unless the market agrees? As we saw with NAMA, the market will still price broader assets of the prices used in the transfer, hence long standing market distortions in Ireland.

– The delayed/staggered nature of the transfer of assets could create a two tier market for similar assets, since the ones valued in the bad bank will be valued much lower than those kept on by the viable banks. This could hamper the viable banks attempts to sell off assets at reasonable values.

– The write downs, although substantial, still seem lacking in areas (not least due to the flaws in the OW baseline stress test scenario). For example, assuming foreclosed land will be worth 20% of previous value may seem substantial, but when there is an real estate oversupply which could take a decade to unwind the prospect of this land being worth anything soon seems unlikely.

– The timeline looks positive with significant progress expected in the near future, however, the full transfer of all assets to Sareb could run well into middle 2013. This delay could drag out the issue and further distort the price discovery in the Spanish real estate market. Also as Zerohedge points out, this timeline may be fine in a vacuum but with everything else going on in Greece, problems could escalate quicker than expected.

– As we’ve noted before, although the private investment is positive, it looks likely to come from mostly other Spanish institutions. This furthers the ‘nationalisation’ of banking sectors and intertwines the problem banks with the healthy banks.

– The plan seems to be, since the institution is not a majority owned by the government, that it will not appear in general government liabilities. It’s not clear whether this will pass muster with Eurostat, or how any losses/transfers from the public sector will impact government finances.

Overall then, a bit of a mixed bag. Some positive plans and it’s good that the plan is progressing (if a bit later than desired) but still plenty of potential pitfalls.