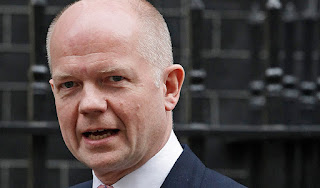 William Hague’s first major (and long overdue) speech on Europe since coming to office struck a refreshing tone. In Berlin this morning, the Foreign Secretary set out a case for economic reform in the EU and a new vision for Britain’s place in Europe that was both robust and intellectually consistent. This was the thrust:

“The Eurozone countries must do what they must to resolve the crisis, but the way forward for the EU as a whole is not more centralisation and uniformity but of flexibility and variable geometry, that allows differing degrees of integration in different areas, done in ways that do not disadvantage those that do not wish to participate in everything, and preserves the things we all value.”

It seems to signal a new tone, if not a new approach, by the Government. Gone was the needless and fruitless lecturing of the eurozone, the counterproductive demands for Germany to pick up the tab for the crisis and the intellectually inconsistent approach that has characterised the UK Government’s rhetoric to date. In short, it has been a complicated mix of demands for a federal eurozone, while threatening to veto the very same thing – ‘eurosceptic fiscal federalism’ as we’ve dubbed it.

“Clearly the Eurozone’s current structures are not working. We respect the democratic decision of the countries of the Eurozone to preserve it. That will require changes. We know the options. It is not for Britain to tell you what the exact remedy should be.”

In fact, Hague held up Germany as a positive economic role model:

“Others can learn lessons, Britons among them, from Germany’s policy choices: structural reforms, its sound public finances and its culture of excellence and enterprise have made Germany globally competitive. It is one of the great trading nations of the world.”

We would hasten to add, this model did not involve cheap central bank cash to paper over deep economic cracks – which seems to be what some members of the UK Government are suggesting the eurozone moves towards. However, the Foreign Secretary still avoided sounding soft. He reminded the German audience that the UK public’s scepticism of the EU is at an all-time high:

“I must also be frank: public disillusionment with the EU in Britain is the deepest it has ever been…People feel that the EU is a one way process, a great machine that sucks up decision-making from national parliaments to the European level until everything is decided by the EU. That needs to change. If we cannot show that decision-making can flow back to national parliaments then the system will become democratically unsustainable.”

He repeated the theme, first developed in David Cameron’s Conference speech, that Europe is losing the global economic race:

“If we do not succeed in making our economies globally competitive and generating sustainable growth then whatever else we do, whatever treaties we sign, whatever structures we build, whatever declarations we sign, will all ultimately be irrelevant. There will be no Social Europe, there will just be an Excluded Europe.”

He also repeated the obvious, yet important, British view that future eurozone integration would have to be compatible with the Single Market:

“While developing a governance of the Eurozone that really works we must equally ensure this leaves the Single Market coherent and intact. The debate on establishing a full banking union shows that this will be complex and sometimes difficult. There are obvious issues for countries not in the Eurozone, for whom it will never be acceptable to have a situation in which the Eurozone acts as a bloc in Single Market institutions in a way that determines the outcomes before the others have even met.”

But, most interestingly, Hague started to articulate a vision of the EU that the UK might be at home in:

“Often important things will not be agreed or cannot be done through the EU. It would be neither right nor realistic to think that questions of war and peace could or should be decided by QMV. Indeed, just because some things work well in coordination with all of our European partners does not mean we should do everything at 27. A more effective EU does not have to mean a bigger, more expensive or more centralised EU.”

“…The EU is already a diverse place and with further enlargement it will become more so: by the time all the Western Balkan nations join there will be more than thirty countries in it. Its peoples do and will want different things from the EU. Some will be in the Eurozone and some not. Some are comfortable with ideas of federalism, other are not. Some, like Britain, play an active part in foreign and security policy, others find its practice difficult. Some yearn to go further in opening up markets. Others find the idea threatening.

We should recognise and embrace that diversity – it would be a dangerous denial of reality to wish it away. We must respond to what our people and democratic institutions are saying – not just in Britain, but across Europe.”

This was not the finished article by any means but it did signify that the Government (or at least its Conservative part) might finally be coming around to the idea that it needs to explain to the rest of the EU – and UK voters – what it wants from any future renegotiation (Hague also outlined the UK’s review of EU powers), and where the referendum will fit in.

The question is whether Cameron’s much anticipated speech this autumn will deliver.