Spanish regions: We hate to say ‘We told you so’, but…

In July, we published a briefing looking at the potential impact of regional debt problems on the Spanish economy. In particular, we noted that Spanish regions were expected to make swingeing cuts to meet the overly ambitious regional deficit target of 1.5% of GDP by the end of the year. Based on the size of cuts each region had agreed on with the Spanish government, we drew the ‘traffic light’ table below: 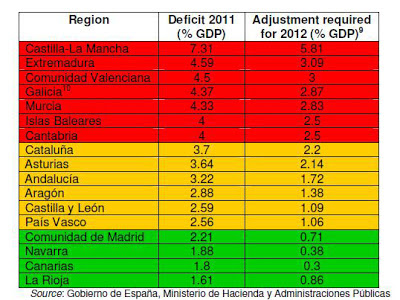 Three months later, it’s time for an update. Following today’s bailout requests from the Balearic Islands and Asturias, eight of 17 Spanish regions have decided to tap the €18 billion bailout fund set up by the Spanish government. And guess what? Four of them (Castilla-La Mancha, Comunidad Valenciana, Murcia and the Balearic Islands) are in the ‘red’ area of our table – i.e. among the regions that, according to us, had agreed to unattainable deficit reduction targets for this year. Catalonia, Asturias and Andalusia – top three in the ‘amber’ area – have also sought help from Madrid. To date, Canary Islands are the only surprise, as they have requested a bailout despite having to make the smallest deficit adjustment of all Spanish regions.

With only less than half of regions covered (although, of course, not all of them will need financial assistance), the Spanish government’s bailout fund for regions (which totals €18 billion) has almost run out of money. Here is what each region has requested:

So, if all regions obtained the entire amount they have asked for, there would be almost no money left in the pot – and two more regions in the ‘red’ area which may well need assistance (the case of Galicia is slightly different, as we explained in our briefing). This is why the Spanish government is trying to hold off on at least part of the loans. It has, for example, agreed to lend Andalusia only €2.1 billion, and €2.5 billion to Comunidad Valenciana – for the moment. However, regional governments will presumably push to get all the money they asked for – which in turn increases the likelihood that the bailout fund will need a top up.

We remain of the view that regional debt problems will not ‘make or break’ Spain financially, although depending on how the payments are handled they may increase Spain’s deficit – as will the fact that the regions are still likely to miss their targets for this year. In any case, though, in the eyes of Spain’s eurozone partners and the European Commission, every additional region tapping the bailout fund adds to the impression that the Spanish government is simply not capable of keeping regional spending under control. For once, we agree with the EU/IMF/ECB Troika on something.