The key to understanding the eurozone crisis: sequencing 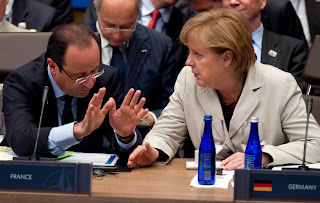 An EU leader saying that he or she is in favour of “more Europe” in response to the Eurozone crisis means absolutely nothing. Ask Germans whether they’re in favour of more Europe, meaning codification of Bundesbank-style fiscal discipline at the EU level, using the EU institutions to enforce it, and naturally they will nod approvingly. Ask them if they want joint EU borrowing or backstops for banks, and support for “more Europe” evaporates. Shock horror, in countries more prone to tax and spend – and here we include France – the trend is pretty much reversed.

The key to understanding the next step in the Eurozone crisis therefore comes down to one thing: sequencing. The Germans want surveillance before solidarity (code word for more cash on the table). The French the opposite. Which is why it’s not surprising that Angela Merkel and Hollande are clashing over the former’s idea to stick an EU veto on national budgets (her finance minister has proposed a fiscal tsar, sitting in the EU commission, to do the job).  Merkel says she wants “genuine powers to clamp down on national budgets…that we stick up for this won’t change”. Translation: if you want our credit rating, you need to accept our Ordnungspolitik. For his part, Hollande stresses intégration solidaire – ‘integration with solidarity’. Translation: cash first, budget vetoes later (sort of).

We’ve made this point several times before, but it keeps on reasserting itself. The see-you-in-court fiscal controls that the Germans need as political cover (and as a safeguard against moral hazard) to press ahead with transfers are incredibly difficult to achieve politically, as they effectively mean redefining national democracy in debtor states (key decisions on spending and taxation would no longer ultimately be subject to decisions in national parliaments).

The question is what the absolute minimum level of fiscal control the Germans can accept to press ahead with the next step. This is why Herman Van Rompuy’s proposal for a contract-style agreement between an individual country and an EU institution, resting on a paid-in insurance scheme (of sorts), could be an interesting to watch. If sold as “temporary” (which of course it may not be at all) and linked to reforms, that might be easier for Germany to swallow.

But at the moment, we suspect Angela Merkel herself doesn’t know the answer to that question…