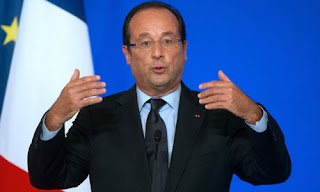 Ahead of tomorrow’s EU summit, French President François Hollande has decided to give a lengthy interview to several European dailies (including the Guardian, Italy’s La Stampa, Spain’s El País and Germany’s Süddeutsche Zeitung). The full interview – the first major foreign interview since Hollande was elected last May – is due to appear in tomorrow’s print edition of these papers, but is already available on Le Monde‘s website.

The French President made some interesting remarks about Germany’s role in the eurozone crisis:

The return to growth involves mobilising funds at the European level – which is the [growth] pact we adopted [at the EU summit] in June – but also improving our competitiveness, and, finally, coordinating our economic policies. Countries running a [trade] surplus must stimulate their internal demand through salary increases and tax reductions – this is the best expression of their solidarity.

Well, Germany is not mentioned here, but the reference is obvious…

We all take part in solidarity, not only the Germans! The French, the Germans, as well as all other Europeans within the framework of the European Stability Mechanism [the eurozone’s permanent bailout fund]. Let’s stop thinking that there is only one country paying for all the others. This is false! Nonetheless, I know our German friends are sensitive about surveillance. He who pays has to control. He who pays has to sanction. I agree. But budgetary union must be completed by the partial mutualisation of debt: through the Eurobonds.

And then something specific about German Chancellor Angela Merkel,

She is outspoken, she says things…This saves time. And I have the same attitude…Indeed, we are not in the same time scale. I was elected five months ago, and the Chancellor has her elections in ten months – but this does not lead us to defer choices.

The language used is certainly diplomatic, but the message to Berlin is clear. First, Germany should bear in mind that there are other countries paying for eurozone bailouts. Second, that debt pooling remains high on France’s agenda.

I would like a United Kingdom fully engaged in Europe, but I can’t decide for the Britons. I’ve noticed that, for the moment, they want to be rather in retreat. The Britons are bound by agreements which they signed up to. They can’t detach from them. They now at least have the merit of being clear. The eurozone, the budgetary union: they are not in them. I do not intend to force them.

I’m in favour of monthly meetings of eurozone heads of state and government…This Eurozone Council will allow us to better coordinate economic policies and make, country by country, the appropriate decisions. It’s not about excluding the other countries: those who want to join the eurozone will be associated to our debates. Certain countries do not want to – it’s their choice. But why would one need them to come and tell us how to run the eurozone?

Finally, some thoughts on the next steps of European integration,

France defends the idea of ‘integration with solidarity’ [intégration solidaire in French]. Every time we take a step towards [greater] solidarity, the union – that is, the respect of common rules – must progress too.

Political union is for later. It is the stage which will follow budgetary union, banking union, social union. It will give a democratic framework to what we will have achieved in terms of ‘integration with solidarity.’

This is not new, but a clear indication that France and Germany are on opposite sides with regard to whether surveillance or solidarity should come first.