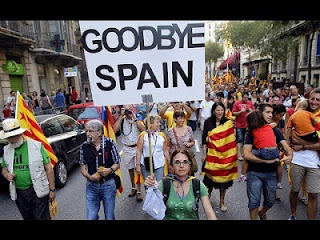 As we’ve argued before, there’s a lesson for the eurozone to learn from the all the semi or full-blown separatist movements across Europe; trying to impose central control on an inherently regionalised structure is extremely difficult and artificially imposing a top-down identity remains as challenging as ever. At the same time, should a region choose to leave an EU county it could, after negotiations, be absorbed by the European structure, which in turn would have a stabilising effect on the tumultuous politics that will follow.

Therefore, separatist movements across Europe simultaneously showcase both the weakness and strengths of the European project. However, what’s clear is that the austerity sweeping Europe is not only creating tensions between national capitals and Brussels, but also national capitals and regions. Just in case you thought the eurozone was on the verge of a agreeing a transfer union….

The Flemish are as unhappy as ever about their domestic transfer union, and this weekend, local elections in Belgium saw the moderate Flemish nationalist N-VA party make substantial gains, using the €16bn a year that Flanders sends to the Francophone region as a political springboard. A leader in Belgian daily De Morgen notes that that the N-VA’s objections to “the left-wing tax government of [Belgian PM Elio] Di Rupo don’t differ that much from “the criticism in other countries of the [eurozone] solidarity mechanism which keeps the Greeks or Spaniards afloat”.

In Spain, the Catalan independence movement is stepping up a notch off the back of Madrid (and Brussels) imposed austerity measures. In September, a pro-independence rally in Barcelona (pictured) mustered between 600,000 and 1.5 million people depending on whether you ask the Catalan or national police. The Catalan government has said it wants to hold a referendum on independence, with a majority of Catalans in favour according to some polls. A motion to permit a referendum was voted down by a majority in the Spanish lower house and could trigger a constitutional crisis if Catalan PM Artur Mas goes ahead with the plans regardless. Spanish Prime Minister Mariano Rajoy has said holding a referendum without the central government’s approval would violate the Spanish Constitution.

The Lega Nord party has been calling for the separation of Italy’s northern regions from the rest of the country. Possibly the main difference between the Italian case and the others, is the fact that the geographical entity evoked by Lega Nord (the so-called ‘Padania’, including all the regions above the Po river) has never existed as an independent state. Furthermore, Lega Nord has usually been more or less aggressive in its pro-independence claims depending on whether the party was in government or in opposition. Nonetheless, many northern Italians do feel that too big a chunk of the taxes they pay is then used to fund ‘dysfunctional’ Southern regions. Potentially one to watch, especially if Lega Nord (as it looks likely at the moment) will stay in opposition after next year’s elections.

While there is no talk in Germany of an independent Bavaria just yet, in July the regional government announced that it will launch a complaint at the German Constitutional Court against the German system of “Equalization payments” between richer and poorer German Bundesländer. Bavaria is the main net contributor to this system with €7.3bn, sharing the burden with only three other states – Hessen and Baden-Württemberg and Hamburg). The rhetoric of Bavarian politicians on the eurozone crisis has also been notably tougher than that of other German politicians as we’ve noted here. Meanwhile, a recent Bild poll found that 46% of Germans were against the separate West-East solidarity income tax levy compared with 42% in favour.

In Scotland the Scottish National Party has won its battle for a independence referendum with Scots being given a single Yes/No question on independence to be held in 2014. The prospects of Scotland becoming independent have however, in contrast to other regions, been damaged by the eurozone crisis with previously favourable comparisons with Ireland and Iceland being turned into examples of the problems of small economies with oversized financial services industries. Other questions that are beginning to be asked are whether an independent Scotland will use the euro (decreasing in popularity) or retain the pound, remain in the EU or have to have border controls. It has also been noted, including by the EU Commission, that Scotland would have to negotiate its EU membership afresh rather than opting in by default off the UK’s entry in 1973.

European Council President Herman Van Rompuy has presented a report calling for a central eurozone ‘Treasury’ with a shared budget and eurobonds – very close to a full-blown trasnfer union.

In Brussels, the logic seems to be that two negatives make a positive.