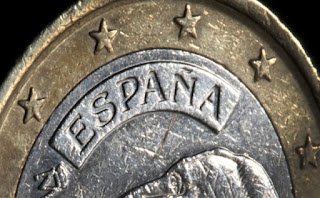 No, we’re referring to the quite strange comments by a Spanish finance ministry official reported in the press this morning. The official reportedly stated that Spain does not see a bailout request as imminent or immediately necessary but would be comfortable making the request for a precautionary credit line in order to potentially access the ECB’s new Outright Monetary Transaction (OMT) programme. All par for the course you would say, but the comments that really caught our eye were the following, via the FT and the WSJ:

“The credit line is not fundamental, it is circumstantial…One could say it’s a virtual credit line,” adding that Spain will likely not access any of the money from the ESM, while the ECB may not even have to buy any bonds.

Let us elaborate, because this seems to amount to a bailout without any money. Essentially, the suggestion is that Spain would sign a new Memorandum of Understanding (MoU), which wouldn’t include any new reforms or conditions, allowing it access to ESM money if it ever became necessary. This would supposedly satisfy the OMT requirements allowing the ECB to intervene in the secondary market for Spanish bonds if borrowing costs for Spain once more reach unsustainable levels.

A very neat idea in theory, as with most eurozone proposals, but we have a few concerns:

We’ll end with an interesting, if somewhat mixed, analogy from the Spanish official:

“One does not just normally drop an atomic bomb. It has to be co-ordinated and discussed. But we [Europe] are all in the same boat.”

Quite. As we’ve previously warned the OMT and Spanish bailout needs to be carefully structured, unfortunately a ‘virtual bailout’ is unlikely to do the trick.