Another cold front on the way from Europe?

Ofgem’s ‘Electricity Capacity Assessment’, published today, makes for some interesting reading as we enter the winter.

This is from the executive summary:

The high level of spare capacity in the GB electricity market is set to end quite rapidly over the next few years. As identified in our 2009 Project Discovery analysis the impacts of replacing older coal and oil power stations under EU environmental legislation together with changes to the generation mix over the next decade pose new challenges to security of supply. Recent developments have strengthened this view. Indeed, power stations ‘opted out’ under the [EU’s Large Combustion Plant Directive] are using up their running hours faster than expected: most LCPD opted out plant will come off the system well before the 2015 deadline.

In short, a mixture of EU environmental legislation and a change in the UK’s energy mix, also driven in large part by EU renewables targets, means that the UK’s spare energy generating capacity could fall from 14% now to only 4% in three years, under Ofgem’s baseline scenario. The graph below shows that in a ‘high winter peak demand’ scenario, the situation could get far worse, with the UK having no spare capacity in 2015/16, which could very likely to lead to blackouts. 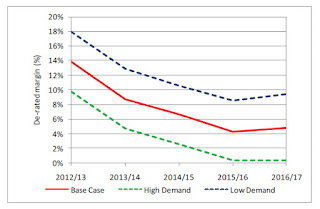 So, as well as trying to get a lot more gas and nuclear power stations built, the UK Government may also need to choose between complying with EU environmental legislation and keeping the lights on.