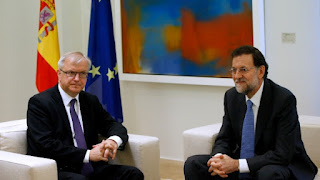 Keeping count of how many times Spain’s deficit targets and forecasts have been revised has become a challenging exercise. Following the publication of its draft budget for 2013, the Spanish government has admitted that Spanish deficit at the end of this year will be as high as 7.4% of GDP – with the EU-mandated target fixed at 6.3% of GDP – once the potential losses on the government’s recent cash injections in the banking sector are taken into account.

However, pending official confirmation from the EU’s statistics body, Eurostat, it looks like aid to banks will not be counted in the Excessive Deficit Procedure (EDP) currently open against Spain. Speaking after his meeting with Spanish Prime Minister Mariano Rajoy yesterday, EU Economic and Monetary Affairs Commissioner Olli Rehn suggested,

It can be expected that this kind of element of increase in the fiscal deficit related to bank capitalisation will be treated as a one-off and will not affect the structural deficit.

We would not be too sure that this settles the question, though. First of all, the EDP covers more than just the structural deficit while other one off impacts (such as Portugal’s transfers from its pension funds) have counted towards reducing the deficit. Secondly, it will be interesting to see how Germany, Finland and others will react – given that, in practice, Spain has just said that it will fail to meet its deficit target again.

In the meantime, as we pointed out on this blog last week, the time for big decisions is approaching for Rajoy. The results of the stress tests have been published, and the draft budget for 2013 has been unveiled. In particular, both the European Commission and Spanish Economy Minister Luis de Guindos have stressed that the measures planned by Madrid for next year go “beyond” the recommendations Spain has been made under the new ‘European Semester’ – potentially paving the way for an EFSF/ECB bond-buying request without unexpected additional conditions attached to it.

Unsurprisingly, rumours of an imminent request have kicked off. According to a senior European source quoted by Reuters,

The Spanish were a bit hesitant but now they are ready to request aid.

With the next meeting of eurozone finance ministers taking place on Monday, this weekend looked perfect for Madrid to apply for an EFSF/ECB bond-buying programme. However, Rajoy reportedly told a meeting of regional Presidents from his party that he would not make the request this weekend. During a press conference less than an hour ago, he also replied with a curt ‘No’ to a journalist asking whether the request was “imminent.”

The domestic political reasons for a delay in the decision (key regional elections in Basque Country, Galicia and Catalonia over the next two months, plus the obsession with avoiding humiliación) are well-known. Apparently, Germany is also standing in the way. Sources have suggested that the German government is keen to “bundle” Spain, Cyprus and Greece into a single dossier, rather than submitting individual aid requests to the Bundestag for approval.

Beggars cannot be choosers, and Rajoy cannot simply ignore Germany’s reservations. Luckily for him, they could even turn out to be convenient on the domestic front. As in previous instances, though, the markets will likely play a big role in the timing of any bailout: a sharp surge in Spain’s borrowing costs could certainly precipitate a request. Should this happen, Rajoy would find plenty of occasions to present a formal request for aid – the next one potentially being the EU summit on 18-19 October…