Germans vs Inflation: the battle continues 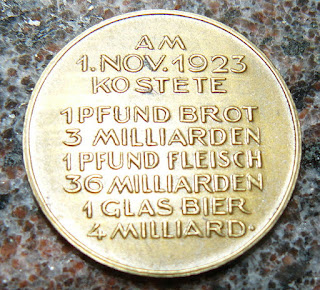 In our daily review of UK and continental press, we spotted an interesting consumer analysis survey referenced on the front page of Bild yesterday. The survey – conducted by Axel Springer AG and the Bauer Media Group – found that Germans were conservative and prudent in terms of their finances with 67.9% of respondents possessing a savings book, 57.2% setting aside a specific sum every month, with only 33.8% having a credit card.

In contrast, in 2010, 64% of the UK’s adult population had a credit card – almost double that of Germany’s. This could possibly help to explain how the German and UK debates on the eurozone pass each other by so often, especially when it comes to the role of the ECB. The view from Berlin is that the ECB ought to remain as the guardian of price stability and not engage in activist monetary policies such as bond-buying, while the view from London, Washington and indeed other European capitals is that Draghi’s recent actions mark a decisive turning point in the crisis, and that it is good that he has been able to overcome German resistance – as argued by David Laws at an Open Europe fringe event at the Lib Dem conference.

Incidentally, former ECB chief economist Otmar Issing has an interview in yesterday’s Die Welt in which he warns against the social and economic damage of unchecked inflation:

“Many people come up to me on the street. Savers are deeply insecure and they have every reason to be. [The ECB’s] monetary policy has reached its limits [it] risks losing its credibility.”

“There is no immediate risk of inflation. However I have my doubts that the ECB will stop its immense liquidity at the correct time. If this fails, prices will rise. I do not anticipate hyperinflation. However, even an inflation rate of 4 to 5% disposes savers and creates social problems… The social partnership between employers and unions, everything depends on a reliable monetary policy. Inflation is the most anti-social policy.”

“[Pumping more liquidity into the system] is a dangerous argument. In putting out a fire, it is also the case that more water is not always better per se. Ultimately it could turn out that the damage caused by the water exceeds the actual fire damage.”

Speaking to the German Industry Federation (BDI) yesterday, ECB President Mario Draghi defended the ECB’s new bond-buying programme, and in an apparent swipe at German fears of inflation, that in times of crisis “we cannot always look to the past for answers”. While Bundesbank chief Jens Weidmann may have been isolated in voting against the OMT programme, he retains the backing of a huge swathe of German public opinion which is deeply rooted in the country’s culture of savings and financial prudence.

This battle is not over by any stretch of the imagination.