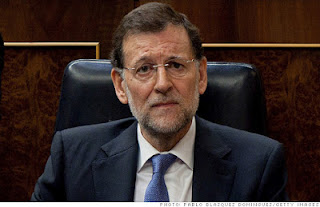 Spanish Prime Minister Mariano Rajoy’s trip to New York for the meeting of the UN General Assembly is coinciding with a particularly eventful week for Spain, on several fronts.

The Rodea el Congreso (‘Encircle the Congress’) anti-austerity rally outside the Spanish parliament building in Madrid turned violent yesterday, with 35 people arrested and 64 injured. The day before the rally, the Secretary General of Rajoy’s party, María Dolores de Cospedal, recalled that the last time the Spanish parliament was ‘encircled’ was on the occasion of the failed military coup on 23 February 1981. The day after the rally, Spanish Interior Minister Jorge Fernández Díaz congratulated the police for handling the situation “magnificently”. We assume these remarks have not done much to placate the protesters.

The demonstrations are clearly not good news for Rajoy and his cabinet. The Spanish government is due to unveil a new reform plan tomorrow, which may constitute the basis of the new Memorandum of Understanding, if (or should we say ‘when’?) Spain decides to make its official request for EFSF/ECB bond-buying. As Rajoy himself anticipated in an interview with today’s WSJ, the plan will include measures to cut the number of early retirements and the creation of an independent body in charge of monitoring Spain’s compliance with EU-mandated deficit targets. Expect further protests fairly soon.

Meanwhile, the deficit of the Spanish central government stood at 4.77% of GDP at the end of August – with the target for the entire 2012 fixed at 4.5% of GDP. The Bank of Spain has this morning warned that, based on data available so far, Spanish GDP is continuing to fall “at a significant pace” during the third quarter of the year.

On the regional front, the rift between the Spanish government and Catalonia seems to be widening by the day. Catalan President Artur Mas announced yesterday that early elections will take place in Catalonia on 25 November. The autumn is going to be very tense, given that the Basque Country and Galicia will also hold early elections on 21 October. Crucially, Mas went one step further this morning, when he made clear that the Catalan people will be consulted on the issue of independence, with or without the authorisation of the Spanish government.

Furthermore, Andalusia’s Treasury Minister Carmen Martínez Aguayo said yesterday that the region will “very likely” seek a bailout from the Spanish government. If confirmed, the request would be for a loan of over €4.9 billion. This means that Catalonia, Comunidad Valenciana, Murcia and Andalusia would, in total, need around 80% of the money in the bailout fund set up by the Spanish government to help all the 17 Comunidades Autónomas.

What else? Oh yes, in case you were wondering, Spain’s borrowing costs are going up again. The interest rate on ten-year bonds is above 6% today.

In this context, it looks like Rajoy will not be able to hold out for much longer. The time for key decisions looks to be approaching – potentially marking a turning point for the future of Spain and the eurozone crisis.