A German euro exit ‘not science fiction’ for Il Cavaliere 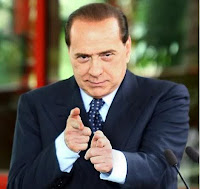 The Huffington Post has decided to go for a lengthy interview with Italy’s former Prime Minister Silvio Berlusconi for the launch of its Italian edition. Il Cavaliere sticks to his form on the euro, firing a salvo at Mario Monti (the Italian elections are drawing closer after all), arguing,

“I would have been less servile than Monti to Germany, a hegemonic state which is imposing the rule of rigour and austerity on other European countries – claiming that one can reduce [public] debt through austerity. But this is an illusion: public debt can be reduced by increasing GDP, which means development and growth.”

Despite coming from a different political family, this sounds very similar to what France’s Socialist President François Hollande said throughout his electoral campaign.

Berlusconi also seems to have revisited previous claims that leaving the euro “wouldn’t be the end of the world” for Italy. He now says “it would be hard to exit the eurozone today”, adding:

“There are three possibilities. The first one: convince Germany that we can’t go on with austerity only. The second one: Germany leaves the eurozone, which is not science fiction given that German banks themselves have considered the possibility of replacing the euro with the D-mark. And the third one: other countries leave the euro, which would, however, mean the end of the single currency and scrapping Europe.”

He says he favours the first option. ‘Buona fortuna’, Silvio.

Asked about his recent criticism of the fiscal treaty – which his party supported in the Italian parliament – Berlusconi claims,

“As the head of the [Italian] government, I fought a solitary battle over the fiscal treaty in Brussels, because France was perfectly aligned with Germany’s pro-rigour stance. I even vetoed the inital draft blocking the discussion…In [the Italian] parliament, we voted in favour of the fiscal treaty for sense of responsibility.”

Interesting claim, as Berlusconi stepped down more than a month before the first draft of the fiscal treaty was tabled..

In other news, Berlusconi is still refusing to officially confirm his comeback.