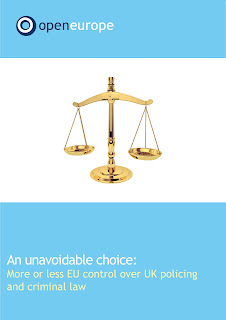 The Sunday Times yesterday claimed that David Cameron will soon announce that the UK government will repatriate some 100+ EU crime and policing laws. According to the paper, the announcement could come before the Corby by-election, expected to take place on 15th November. The idea is to lure Conservative voters away from UKIP (but that’s not the only reason for the timing, we might add).

To recap: Under the Lisbon Treaty, the UK has the right to use a ‘block opt-out’ from around 130 EU crime and policing laws, including the European Arrest Warrant, Eurojust and rules on data sharing, or see ultimate jurisdiction over these laws transferred to the ECJ. An unavoidable choice, in other words, between more or less Europe. After using the block opt-out, the UK can then choose to opt back into individual laws on a case-by-case basis.

In a report published in February, we argued in favour of the UK taking the opt-out and then having an honest and open debate about the most crucial laws that it wanted to keep, possibly seeking to renegotiate these so that the ECJ – whose rulings are almost always in favour of ‘more Europe’ – is left out of the mix. Our recommendation was subsequently backed by over 100 MPs, in a letter to the Telegraph. We have since argued in favour of taking the block opt-out on numerous occasions, calling on the government to announce it this year (giving them enough time to negotiate opt-ins). Absent a major U-turn, the UK government will now follow our recommendation. In truth, it was always going to be difficult for it to avoid taking the opt-out, given the political climate.

The debate has now shifted to what, exactly, the UK government should seek to opt back into, with the Lib Dems and Tories currently in talks, with the former naturally wanting to sign up to more laws than the latter. According to the Sunday Times, “dozens” of measures are on the table – we’ll return to what we think the UK should remain part of, in the very near future.

In the meantime, in an exceptionally well-timed debate, Open Europe, alongside Centre Forum, organised a fringe event on Saturday, at the Lib Dem conference in Brighton, looking at this very issue. The debate featured our very own Stephen Booth, Lib Dem MP Tom Brake, Tory MP Nick de Bois and Lib Dem MEP Sarah Ludford. A write-up of the event can be found here.