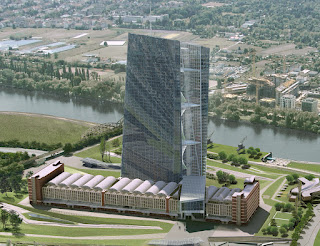 With budgetary discipline the only game in town in the eurozone, it must have been a bit of an awkward moment at the ECB when they realised that the bank’s new Frankfurt headquarters (pictured), currently under construction and due to be completed in 2014, will come in significantly over budget.

We are monitoring the construction progress, costs and price developments very closely, adjusting and adapting where necessary. As a public institution, we are committed to using our resources responsibly. This is essential. So far the ECB has spent approximately €530 million in construction and other costs, including the purchase of the site. In 2005 the overall investment cost was estimated at €850 million at 2005 constant prices. It is anticipated that increases in the price of construction materials and construction activities from 2005 until the completion of the project in 2014 will lead to a €200 million increase in the overall investment cost.

In addition, there have been a number of unforeseen challenges that needed to be dealt with. The two major challenges unforeseen in 2005 were, first, that the original tender for a general contractor did not yield a satisfactory result and the ECB had to change to a different contractor model, and second, that the Grossmarkthalle – a large industrial heritage building from 1928 – presented a number of challenges that were not detected in the initial examination conducted prior to the acquisition:

These factors are likely to account for additional costs of about €100-150 million, or a 10-14% increase in the overall investment cost. The resulting delay in the construction works on the Grossmarkthalle, as well as the entrance building, has been incorporated into the existing time schedule.

So overall the total cost is likely to come in at around €1.2bn, a tidy sum of money, even at a time of multi-billion euro bailout funds. We estimate that the cost of the new building amounts to around half of the outstanding cuts the Greek coalition still has to make in its latest austerity package.

DPA notes that the new building will hold 2,300 personnel, seemingly large enough for a central bank. Although when you consider that the ECB is currently looking to take over the supervision of 6000 financial institutions – a job which national supervisors currently employ tens of thousands of people to do – one does wonder whether another new building could be needed in the near future.

We can’t say the ECB is setting a great example for austerity, especially given that is now a precondition for accessing its new bond-buying programme.