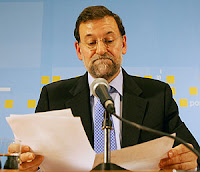 One should give some credit to the Spanish government for its determination in trying to make bailouts look like something else. Today’s El País reports that Spain is planning to request that the unused money from the €100 billion bank bailout package agreed with the Eurogroup a couple of months ago be used to buy Spanish bonds on the primary market.

This, in turn, should be enough – or at least this is what people in Madrid hope – to convince the ECB to start buying Spanish debt on the secondary market. According to the paper, the results of the independent audit of Spain’s banking sector – whose publication has been postponed to 28 September – are expected to confirm that Spanish banks need a total capital injection of no more than €60 billion.

Therefore, the Spanish government is confident that, assuming that banks will be able to raise at least part of the money from alternative sources, it will only have to use less than half of the rescue package for bank recapitalisation – which would leave some €55-60 billion available. In other words, Spain sees the possibility of obtaining ECB support without having to apply for a separate EFSF bond-buying programme – i.e. without having to ask for more money.

Good effort, but too many ‘ifs’ remain. First of all, the results of the audit should not be taken for granted. As we recently argued, the real capital needs of Spanish banks may turn out to be higher than the €60 billion Mariano Rajoy and his cabinet are currently betting on. Furthermore, even if the €60 billion figure were confirmed, it is fair to assume that Spanish banks may face unreasonable borrowing costs on the markets – compared to what is on offer through the bailout funds. Therefore, they may find it much easier to just ask the government for cash.

Secondly, according to the draft agreement that we published on our blog (see here), Spain does indeed have the right to request that part of the €100 billion be used for purposes other than bank recapitalisation. However, in order for this to happen, the Memorandum of Understanding will have to at least be substantially revised and a whole new one may need to be created. Now, Rajoy is assuming that no new conditions would be imposed if Spain were to apply for a bond-buying programme – and the European Commission appears to share his view. However, it is far from clear whether this will actually be the case (see the recent comments from Eurogroup chairman Jean-Claude Juncker and Dutch Finance Minister Jan Kees de Jager).

Finally, it remains to be seen whether the ECB or Germany will agree to such a plan, especially since it further muddies the water between bailouts and conditionality – not exactly clear cut as it is under the ECB’s bond-buying programme.

Rajoy may have to make a decision fairly soon. The markets do not like prolonged uncertainty, and the first signs of impatience are already visible. Whatever the solution, it will need political approval from all the parties involved, as much as creatively adjusting current plans may seem, there is no circumventing this fact.