Westerwelle’s Future of Europe report – worth getting excited over? 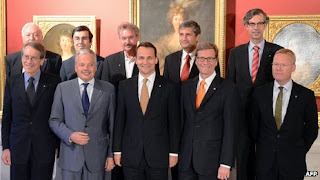 The so-called ‘Future of Europe’ reflexion group of eleven European foreign ministers, set up by Germany’s Guido Westerwelle, to discuss and propose ideas on organisational and structural change in the EU held its closing meeting on Monday. Yesterday it released its final report and conclusions, the broad thrust of which is that, to emerge from the crisis, Europe needs more economic and political integration.

In terms of the economic and fiscal side, the majority of the proposals in the document have already been agreed or proposed, such as the “reinforced economic governance framework” – i.e. the fiscal treaty and a single supervisory mechanism for eurozone banks. Even the possibility of making the ESM into a fully-fledged European Monetary Fund has already been voiced. Furthermore, these proposals will only apply to eurozone members and any non-euro members who participate voluntarily.

It is therefore the political/institutional side that is the most interesting and here are the key points that we’ve picked out:

Most of these proposals have been around the block once before but some journalists have gotten very excited about this, with the Guardian splashing the story on its front page. Running with a “Britain is isolated” theme it also noted that:

“The likelihood is that the 11-country consensus will swell into a majority among the EU’s 27. Britain also stands apart from this. The 11 include Germany and France, the big ones, plus Italy, Spain and Poland – after Britain the biggest EU countries.”

Well, not quite.
Sure, some of these proposals are conspicuous, and certainly they pose a challenge for Britain. However, many of them have almost no chance of going ahead, certainly not in the immediate future. Firstly, the report represents less of a consensus amongst the relevent states and more of a brainstorming session with lots of dissenting views. As the note itself states:

“The report reflects our personal thoughts. We wish to underline that not all participating Ministers agree with all proposals that have been put forward in the course of our discussions, and that the Member States’ individual treaty obligations and rights within the various policy areas have to be taken into account.”

As stated above, there is significant momentum for more integration in economic, fiscal and banking affairs, but its hugely unlikely to spill over into foreign policy which exists in a parallel political sphere. This is simply a way to re-state the long-standing German desire for a Europeanised foreign policy (the practical difficulties of which have been made clear many times, most recently over Libya).

Super-QMV for treaty change won’t happen either – not least since Berlin itself would block it if push comes to shove, as would Paris – unless they would be willing to risk – for example – QMV on the European Parliament’s second seat in Strasbourg.

Banking union, and calls for EU treaty negotiations to be opened by 2014 – as called for by Barroso in his ‘state of the union’ speech last week – is where the story is at.

The context for this whole initiative is effectively German domestic politics. While no one can question Guido Westerwelle’s European credentials, he is arguably one of the most side-lined Foreign Ministers in the whole EU, and the Future of Europe group is a way for him to show he’s still a player.  For Merkel this serves as a useful exercise at a time when the German government is über-sensitive to accusations that it is not sufficiently ‘pro-European’ – but without actually having to do anything.

Finally, it is worth contrasting the lofty idealism of such – and similar – proposals with the cold, harsh realities of public opinion. As we reported on Monday, support for the EU and the euro has hit an all-time low in Germany, in France a majority of those surveyed said that given the opportunity now, they would vote against ratifying the Maastricht treaty, while the EU debate in the Netherlands is also become more complex.