Merkel caught in the middle between the Bundesbank and the ECB 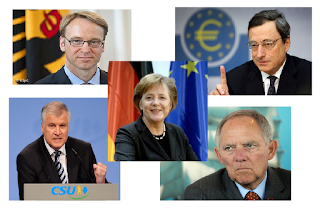 In her traditional news conference following the summer recess, German Chancellor Angela Merkel walked a fine line in questions about the eurozone crisis, having to maintain a delicate balancing act with regards to different elements within her governing coalition.

For starters, she has to contend with the increasingly fractious rhetoric from the CSU – the Bavarian sister party of her own CDU – on the eurozone (see here and here for examples). The latest example being Bavarian Prime Minister Horst Seehofer’s argument that the €190bn cap on German liability imposed by the German Constitutional Court in its ruling on the ESM and fiscal treaty last week should apply to the euro-rescue effort as whole, including the ECB’s new OMT bond purchasing programme. However Merkel has rejected this interpretation on the basis the two are not linked. Speaking earlier today, she told reporters that:

“If the ECB determines that monetary transmission has become difficult, then it must take measures to ensure price stability – it is not up to us to set it limits.”

Seehofer later confirmed that “this is the only issue which we interpret somewhat differently than in Berlin”, adding that it was nonsensical for the Court to cap Germany’s liability at €190bn only for “it to be suddenly increased by many multiples through other means”.

On the other hand however, Merkel did not issue a statement of blanket support for the ECB’s actions, adding that Bundesbank President Jens Weidmann’s recent interventions – in which he has been fiercely critical of renewed ECB bond-buying were “understandable and always welcome”, a statement widely interpreted in Germany as a subtle rebuke of Finance Minister Wolfgang Schäuble’s comments in an interview with Frankfurter Allgemeinen Sonntagszeitung yesterday in which he criticised Weidmann for his public dissent, arguing that “I’m not sure that making this debate semi-public helps to build confidence in the [European] central bank.”

Merkel is in a tough position because, having invested so much in the euro-rescue, she cannot afford to oppose the ECB’s ‘big-bazooka’ strategy. At the same time however she cannot allow Weidmann – whose views are widely respected and shared by the German public – to become completely isolated for fear this would provoke a substantial domestic backlash.

How long Merkel will be able to keep her fractious coalition together on one hand while also keeping the German public – whose support for the EU and euro has hit an all-time low – onside remains to be seen, especially in the event of unforeseen developments such as Germany actually suffering direct losses on its loans to Greece and/or losses on ECB holdings of Greek debt.