Do the Germans and French still believe in Europe? 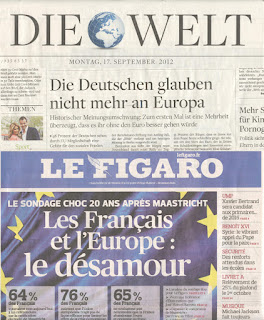 The front page of today’s Die Welt reads “Germans no longer believe in Europe”. According to a TNS Emnid poll carried out in July in Germany, France and Poland on behalf of the Bertelsmann Foundation, support for the EU and the euro has hit an all-time low with 49% of Germans saying they believe they would personally be “better off” without the EU, with only 32% saying that they would be “worse off”. By contrast only 34% of French and 28% of Poles said they would be better off without the EU.

The poll also found that 65% of Germans (and 36% of French) believed they would be better off had the euro not been introduced.

While the gap between French and German public opinion reflected in the above poll is striking, it is not all good news from France as far as the European Commission is concerned. The front page of today’s Le Figaro runs with the headline, “The French and Europe: The disenchantment” (although the French word désamour can also be used to describe someone ‘falling out of love’). The paper reports on a “shocking” IFOP survey conducted twenty years after the Maastricht Treaty was signed – and the euro was officially created.

Furthermore, a large majority of French also think that the adoption of the euro has had a negative impact on the competitiveness of the French economy (61%), unemployment (63%) and price levels (89%). Interestingly, though, 65% of respondents are opposed to returning to the franc.

Furthermore, the survey also found that 60% of respondents are in favour of “less European integration” of budgetary and economic policies, while 56% consider it “unlikely” that, in the long term, EU member states will give up their sovereignty to establish a “single European state”.

Another tough reality check for European Commission President José Manuel Barroso’s recent calls for a “federation of nation states” in Europe. As we already noted last week (see here), public opinion across Europe does not really seem to be on the same wavelength…