¡Cuidado, Señor Rajoy! The Catalans mean business (and the lesson is for the eurozone) 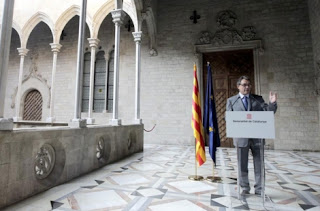 As we have noted before, whether you sit in Brussels, Berlin or Madrid – and like the idea of more central control – beware regionalism.

The relations between the Spanish central government and Catalonia seem to have reached a new level of tension in the past few days. Somewhat paradoxically, fresh from asking Madrid for a €5 billion bailout, Catalan leaders are starting to talk tough. There have been plenty of hints at independence – although the actual I-word has not been used in public speeches so far.

A pro-independence rally also brought Barcelona to a standstill on Tuesday, 11 September – when Catalans celebrate their national day, La Diada. In a perfect illustration of the forces of regionalism, local police said up to 1.5 million attended the rally, while the Guardia Civil (Spain’s national police), cited 600,000 as a more realistic number. In any case, there were a lot of Catalans out on the streets.

Fueling the reinvigorated independence mood is Catalan Governor Artur Mas. The “success” of the pro-independence rally, he argued, shows that Catalonia can become “a normal nation in Europe” (during his speech he had only the Catalan and the EU flag behind him, see picture).

Yesterday, the Catalan Governor drew an interesting parallel with the eurozone crisis. He said,

He said the time had come for a referendum on Catalonian independence, threatening early elections if Catalonia does not get greater tax collection powers. However, taking his eurozone parallell to its logical end point, he did not say whether the north and south in the eurozone should also opt for a divorce.

Because, as we have argued before (see here and here) and just as the Governor suggests (though, just to be clear, we’re not taking any positions in the debate on Catalan independence!), Spain is a microcosm of what may be to come in the eurozone:

Catalonia is not about to go independent. But this debate is a huge flashing warning sign for the eurozone.