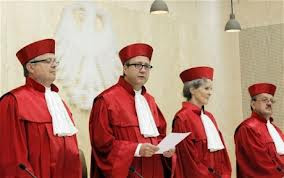 Following yesterday’s ruling by the German Constitutional Court in which it gave the go-ahead to both the ESM and fiscal treaty, German politicians from all the main parties were tripping over-themselves to praise the Court and its ruling. Speaking in the Bundestag, Chancellor Merkel declared it “a good day for Germany and a good day for Europe” while Foreign Minister Guido Westerwelle praised “the [Court’s] wise decision in the pro-European spirit of our Constitution.” The SPD’s parliamentary leader Frank-Walter Steinmeier also welcomed ruling, in particular the additional participation rights for the Bundestag.

While some politicians – including those who had themselves lodged legal challenges – said they were disappointed, even politicians who have been among the fiercest critics of the euro-zone bailouts declared their satisfaction, with, for example, the FDP’s Frank Schäffler describing the verdict as a “victory for democracy”, claiming that with the imposition of the cap on German liability, “The ESM has lost its sharpest tooth”.

However, interestingly the German media has adopted a more sceptical tone altogether. For example, today’s Süddeutsche comments that:

“In their ruling, the judges clearly called out the risks of the euro-rescue but drew few consequences. Their reservations do not change the fact that Europe is moving together under great financial and political risks.”

In a front page op-ed, Die Welt editor Thomas Schmidt draws in the ECB OMT bond-buying angle – something that we also cover in our analysis of the ruling – arguing that:

“The Court watches over German money and the issue of democratic legitimacy. It is clear that the ECB decision has opened the way into the bottomless transfer union in principle. It is equally clear that the legitimacy of the path towards the further deepening of European integration is poorly grounded. This must and will result in yet more legal challenges.”

FAZ‘s economics editor Joachim Jahn describes the verdict as “a slap in the face of financial policymakers”, but warns that:

“With the requirement to secure a liability cap binding under international law, the judges have at least curbed the potential harm to the taxpayer… It is however questionable how much exactly the Karlsruhe order would be worth in an emergency. A protocol to the effect that Germany does not feel itself bound by alternative interpretations of the agreement is would be easy to obtain. Whether this would be considered material by the ECJ in the event Italy and Germany were to argue over reserve liabilities is by no means certain.”

Last but not least to Bild Zeitung, whose chief editor Nikolas Blome argues that:

“The ECB’s [OMT] programme is perhaps well intended but not well executed. It is highly dangerous – and here the Court’s ruling changes nothing. The double whammy of the ESM and ECB is essentially so strong so as to be able to save every eurozone member. However, exactly this will lead all eurozone states into temptation: why enact painful reforms and brutal savings when it could be supposedly easier at the expense of the others, and Germany in particular?”

The relief of Germany’s politicians is palpable, but the battle for the future of the euro – and the role of the ECB in particular – is still far from over.