Too soon to jump to conclusions: the Dutch debate on Europe has only started 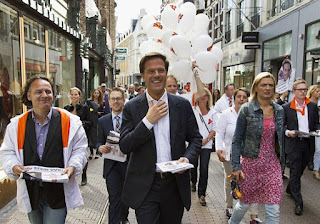 As we said in our pre-election briefing, the Dutch elections saw a shift back to the centre, compared to the early signs of the campaign. Granted, a stronger combined majority for the two main parties – centre-right VVD and centre-left PvdA – than many had expected. The Socialist Party stayed on the same number of seats as last time around, while the populist Party for Freedom suffered a pretty heavy defeat (losing nine seats).

Senior Brussels figures were quick to hail the result as a victory for the pragmatic, pro-European centre over the crazy fringe. A victory for further European integration, euroscepticism can’t win votes, sort of thing. Some media outlets drew similar conclusions – with some exceptions – claiming the anti-bailout mood in Europe is much over-stated. But is this interpretation right?

There’s no doubt that the centre parties mounted a strong comeback, in the face of an increasingly sceptical public on Europe. But to see this election as a victory for the very specific vision of Europe that involves “ever closer union” is spurious. A few points:

First, Geert Wilders is no proxy for unease about where Europe is heading. In almost all aspects of policy Wilders is extreme, and his decision to bring down the last government has undoubtedly worked against his party. The Dutch may not like bailing out other countries, but they do not like reckless politicians either, and some voters considered a vote for him wasted.

As we noted in our pre-election briefing, the centre parties too – particularly VVD – have struck a more euro critical tone of late, perhaps in response to the strong rhetoric coming from Wilders and the Socialist Party. On Europe, the VVD may have crowded out Wilders, particularly by talking tough on bailouts. Regarding Greece, almost exactly repeating Wilders’s words, Prime Minister Mark Rutte said, for example, that:

“Enough is enough…An exit may be inevitable, but it will be up to Greece to make that decision…An orderly exit is possible, but not desirable.”

In a comment piece in the FT last year, Rutte was one of the first to call for a clear mechanism to push countries, which do not meet the austerity targets, out of the eurozone – at the time widely acknowledged to be a shot across Greece’s bow. On the EU budget, he has sided with the UK in trying to achieve a real terms payments freeze in the EU’s 2014-2020 budget, saying, “If we countries need to cut our budgets, also the European institutions need to do with less.”

The Social Democrats, led by Diederik Samsom, played a role in triggering the elections by refusing to support the previous government’s budget dictated by EU deficit rules. It is true, this was their prerogative as the opposition. Nonetheless, they did their fair share of anti-Commission posturing such as:

“[It’s about] how the Treaty is being applied…The economy is suffering damage in an unnecessary way because of the demands of the Commission”.

And during the election campaign, the party had some other interesting things to say about European integration, such as:

“I’d reserve [Eurobonds] for the moment Europe is away from the abyss. Eurobonds are no rope to drag you out of the abyss. Economies need to converge and public debt needs to stabilise first.”

“I don’t support the blueprint of [EU-federalist D66 leader Alexander] Pechtold with his European government, Finance Minister and Parliament.”

In the party manifesto, it called for a reduction to both the EU budget and the Dutch contribution to it – not even the UK Tories did that.

Equally, Europe Minister Ben Knapen, a CDA member – whose party may be needed to achieve a government with majority in both houses of the Dutch parliament – saidthat“there should be a legal possibility for countries to voluntary or forcefully leave the eurozone. Only then the moral hazard – which is like a hostage – can be dealt with”. He also urged to “correct the power the European Commission, which has been enormously growing in recent years.”

On the wider point about the Netherlands in Europe – and whether this election will make it more or less assertive – the centre parties may be far more supportive of the status quo in Europe, but they are different on economic and social policy, completely different sides of the political spectrum in fact. Making the coalition work at all will be a huge challenge. Throwing the difficulties of the eurozone crisis into the mix makes the task even harder, while any pressure for greater integration may force the governing parties to be seen as acting tough, under the pressure from opposition parties.

No, the Dutch haven’t turned into head-banging eurosceptics. But all of this is to say that the debate about the Netherlands’ role in Europe, in the face of further euro integration, may just be kicking off.