Public opinion and Europe: back in the real world

Brussels is on manoeuvres. European Commission President Barroso yesterday called for a quantum leap towards a “federation of states” (see here) and today his counterpart in the European Council, Herman van Rompuy, put forth a wishlist covering a range of items that will trigger more eurozone integration (a eurozone budget, debt-pooling, etc). With yesterday’s Dutch elections being interpreted as a victory for the centre over the eurosceptic fringe, and the Karlsruhe guys in red robes out of the way, the European project is breathing some fresh air again, right?

Well, as ever, it’s more complicated than that. We will return to the Dutch elections in a sec, but for now, US-based German Marshall Fund published the 2012 edition of its Transatlantic Trends survey which is quite interesting.

The chart below caught our attention: 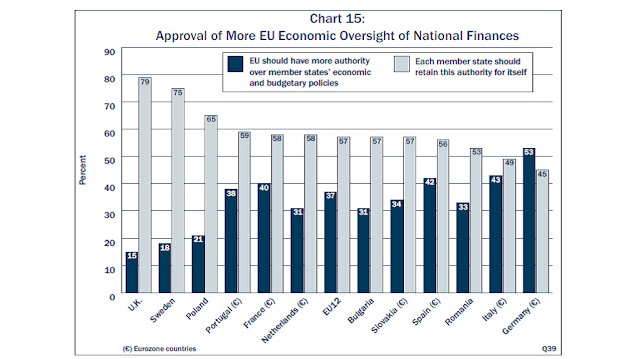 With the exception of Germany – which is not surprising given its desire to export German budget dsipcline in return for lending its credit rating – a majority of respondents in all the other eleven EU countries included in the survey is opposed to “more EU economic oversight of national finances.”

As consolation, ‘only’ 79% of the British now think that the UK should retain control over its finances (down from 84% in 2011). A vaguely asked question about helping “countries with budgetary difficulties” – which is too imprecise to have a real meaning – also saw a declining share of the population supporting it.

A federation of states remains a tough electoral sell everywhere…