The ‘forgotten man’ of the euro crisis catches a break… 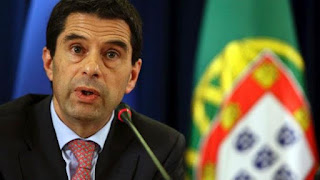 While everyone is gearing up for the EU’s ‘Super Wednesday’, Portuguese Finance Minister Vítor Gaspar has made a quite important announcement. As we anticipated in our daily press summary more than two weeks ago, following its fifth monitoring mission to Lisbon, the EU-IMF-ECB Troika has decided to give Portugal one extra year to make the budget cuts agreed under its bailout programme.

The ‘forgotten man’ of the euro crisis will therefore be allowed to close the year with a deficit of 5% of GDP (instead of the previously agreed 4.5%). Portugal will then have to cut its deficit down to 4.5% of GDP (instead of 3%) next year and to 2.5% of GDP in 2014. No doubt the one off transfers from pension funds to push the deficit below previous targets finally caught up with them.

The news is particularly interesting – and not only because Portugal seems to have fairly easily achieved what Greece has failed to obtain so far, despite Greek Prime Minister Antonis Samaras’s recent ‘diplomatic offensive’. In fact, Portugal is still expected to return to the markets in September 2013 (exactly one year from now). Given that the country has been allowed to run a larger deficit for this and next year, this suggests that it will have to borrow more money to cover for it.

For the moment, Gaspar has made clear that nothing has changed on that front, and Portugal will try to raise the money from private lenders (i.e. will not ask the EU and the IMF for more cash).

However, this brings us on to another interesting fallout from the ECB’s new Outright Monetary Transactions (OMTs). Since currently bailed out countries, such as Portugal, can access support from the ECB when they are due to return to the markets, there is a good chance that the ECB could buy up some existing Portuguese debt from the secondary markets in September 2013, allowing banks to reinvest this money in the  new debt Portugal will issue. This also allows Portugal (and the eurozone) to sidestep the IMF’s demand that countries be able to show clear funding streams for 12 months (which led to the second Greek bailout request).

So, despite delaying its deficit target and not being guaranteed market access within twelve months, Portugal looks able to avoid a second bailout with the help of the ECB (at least for the moment). One should now only ask whether the conditions attached to the Portuguese bailout programme will satisfy the ECB, especially after they have been eased…