New figures show that 51.4% of UK goods exports are sent outside the EU and we run an EU trade deficit – does that tell us anything?

New trade figures out today show the UK exports more goods to countries outside the EU than to countries inside EU. But what is the relevance of this or the fact that the UK continues to run a trade deficit with the EU?

As the graph below shows, the UK has for most of recent history sent far more than 50% of its total goods exports to the EU. The UK’s services trade is more diversified but it is a traditional argument that the EU’s customs union is vital to the UK’s goods exports. The recent figures for July 2012 seem to buck the trend due to weak EU export and better non-EU export figures. As an aside, the proportion of goods exports going to eurozone countries fell to 43.6%, the lowest share since records began in 1988. 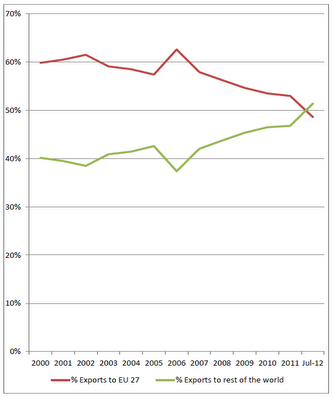 So is 50% significant?
The simple answer is no. 50% is a rather arbitrary figure;** it would make little difference if the UK only exported 40% to the EU – it would still be vital to ensure it continued, although it could be argued that the less the UK relies on the EU for its exports the stronger its hand politcally.

But the more important question for now is whether the UK’s membership of the EU is the best way to promote trade and if so whether this benefit is offset by the other costs of membership (budget, regulation, CAP, etc).
Is the UK’s trade deficit with the EU a strong card to play if we left the EU?
The second potentially significant trade figure out today shows a UK trade deficit with the EU in goods of £4.3bn – bigger than that for non-EU goods. 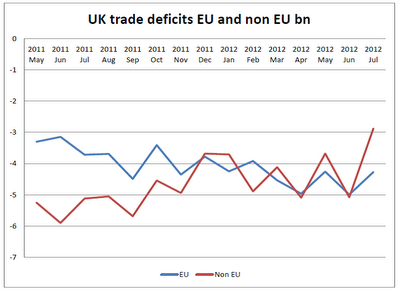 However, the UK’s record in goods also needs to be considered along with its more healthy balance in services trade, but even when services are included the UK still posts a total trade deficit with the EU.

So is it a strong card?

If the UK left the EU would it be able to strike a deal that preserves the UK’s trading relations with the rump EU without the costs? One argument goes that its deficit is a ‘trump card’ that will force the remaining EU to conclude a favourable Free Trade Agreement (FTA).

Yes the UK has a deficit but what is more important is total volume of trade. For the UK total EU trade is now less than 50% of its exports. Less than it was, but for the EU (ex UK) the UK would amount to only 22% of its total exports (E306bn out of E1,348bn) – who has the upper hand? Clearly for the EU 22% of its total exports is a lesser consideration than the UK’s 50%. Striking a trade deal should be mutually beneficial, but things are seldom that clear and, given recent hostility to UK financial services exports, the comparitively weaker UK position could be significant.

Does the UK’s membership of the EU discourage its trade outside the EU?

Mostly no, although the future is less certain. The UK’s non EU trade is governed by the EU’s Common Commercial policy which includes the EU’s network of free trade agreements and its seat at the WTO. In outsourcing its foreign trade policy to the EU, the UK is trading off its specific negotiating requirements against the weight of a common negotiating position, backed by the incentive of the Single Market. The EU has a reasonably good record in pursuing liberal trade deals, where its combined weight helps, however sometimes UK priorities (services) get subsumed to others’ priorities. One area where being in the EU does not help UK trade is the protectionism surrounding agriculture, where the UK on its own would probably chose to import cheaper products from outside the EU than currently allowed.
What is the best way to increase UK trade?
In our recent paper “Trading Places” we looked at the operation of the EU from the perspective of UK trade and concluded that it was currently working. Not at as well as one might like, but still working. However the outlook may change; the benefits of the Single Market may not be increased due to problems implementing further liberalisation in services and the EU may lapse into protectionism in its external policy leading to less favourable trade deals for the UK that stop it benefiting from growth markets for its services.

But, of course, UK membership of the EU includes other membership costs (EU Budget, CAP, regulation etc.) so in order to ensure that EU membership remains beneficial for the UK, the Government needs to reduce these costs as well as increasing the benefits where possible.

Given that the UK, with mixed success and too different degrees, has been pursuing a liberal trade agenda in the EU for some time and the caveats noted above, this is no longer enough to ensure the benefits will continue to outwiegh the costs over the long term. The Government therefore needs to do far more to reduce the cost side of the equation, which requires the renegotiation of the UK’s terms of membership.

** We accept that the UK’s trade to the EU is inflated by both the ‘Rotterdam Effect’ and import displacement particularly as a result of the CAP.