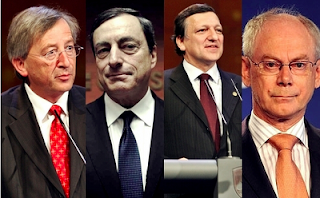 The details are understandably vague but, according the German daily’s report, the new parliament, in which both MEPs and national parliamentarians would sit, would have powers over eurozone members’ fiscal and economic policy. Whether the EU will need yet another building for this is yet to be addressed…

Nevertheless, the proposal, if it ever sees the light of day, will be hugely controversial with both euro and non-euro members and would of course require Treaty change.

In addition, Van Rompuy and Barroso need reminding that they represent the 27 member EU and not simply the eurozone and that any brief to restructure the eurozone needs to square this with the EU as a whole and the requirements of the single market. Additionally, as we have argued, the UK must ensure that any grand eurozone plans such as these are a quid pro quo for establishing a space in Europe for those countries not intent on joining the single currency, and also for those that may choose to leave.

This might then provide a new form of membership that the UK could live with in the long term.