Germany faces some tough decisions on the ECB 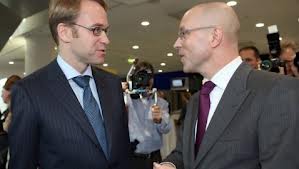 As the next ECB meeting approaches on 6 September, the debate about potential ECB intervention is heating up. This past weekend was particularly interesting with two key German players weighing in with their views – even more importantly these views turned out to be increasingly divergent.

German ECB Executive board member Jörg Asmussen (on the right of the picture) revealed more details on potential ECB intervention yesterday, saying, “Under the framework of the new programme, the ECB will only buy bonds with short maturities,” adding the caveat that, “The whole discussion will be led by the requirement that any concerns about treaty-violating state financing are dispelled. We will only act within our mandate.” Asmussen also stressed that he would like to see any ECB intervention initiated in tandem with use of the eurozone bailout funds, saying, “The error with Italy…must not be repeated,” seemingly referring to the Italian government’s failure to take full advantage of the time bought by the ECB over the past year.

Meanwhile, Der Spiegel has a lengthy and interesting interview with Bundesbank President Jens Weidmann, the other German on the ECB’s Governing Council, in which he renews his opposition to any greater intervention by the ECB, warning, “We shouldn’t underestimate the danger that central bank financing can become addictive like a drug,” adding that proposals for ECB bond purchases were “too close to state financing via the money press”.

Together, these two men represent Germany at the ECB, so for them to strike such different tones is rather surprising (although it has been hinted at previously). Asmussen remains much more positive and supportive of Draghi’s position, while Weidmann takes a more traditional German stance against any prospect of monetary financing of government debt (a position which has garnered significant support with the German public).

The real question though, is who has the support of German Chancellor Angela Merkel? That remains unclear, particularly with both having previously been close advisors to Merkel. The Spiegel article suggests that Merkel has become somewhat impatient with Weidmann’s strict ideological stance, especially as it begins to hamper a potential path to crisis resolution (at least in her eyes). However, last week Handelsblatt suggested Merkel had in fact decided to side with Weidmann over Asmussen.

If this divide continues, the issue will likely come to a head leading to some tough decisions for all involved – in fact any decision to sanction greater intervention would make Weidmann’s position in particular quite difficult. Choosing who to support will be a difficult political decision for Merkel which goes beyond just figuring out how best to solve the crisis – she must weigh the public response at home and abroad, the market impact, her relationship with ECB President Mario Draghi and her support within her own party and the broader German coalition. Asmussen also has to tread a careful line as, despite being independent, he risks seeing his influence and support within Germany decline rapidly. Weidmann, whom many have suggested has already become isolated, risks a similar erosion of support, although abroad and within the ECB rather than Germany. If greater intervention comes to pass, as seems increasingly likely, the spectre of his predecessors Weber and Stark, both of whom resigned from the ECB Council in protest, will undoubtedly loom large.

As we have noted countless times before the role of the ECB cuts right to the heart of the German approach to the eurozone. Expect plenty more developments on this front in the near future.