Another blunder for Monti 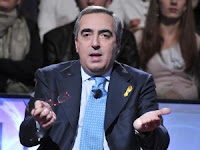 As competent as he is, Italian Prime Minister Mario Monti has really stepped in it this week. Only one day after Der Spiegel published his pretty unfortunate statement that eurozone governments should not be “completely bound by the decisions of their parliaments”, the WSJ yesterday published excerpts from an interview with Monti from last month. In the interview, Monti suggested that, if Silvio Berlusconi and his government were still in power,

Italy’s spreads would now be at 1,200 or something.

He might be right, but still not smart politics. Remember, although Monti leads a technocrat-only government (and, indeed, is an unelected technocrat himself), he has to rely on parliamentary support to pass the structural reforms Italy needs so badly.

Berlusconi’s party still holds the highest number of seats in both chambers of the Italian parliament. Therefore, if Berlusconi’s MPs and senators were to withdraw their support, Monti and his cabinet would have no alternative but to quit. So Monti should probably choose his words more carefully.

Berlusconi’s party instantly retaliated, and the result was the government failing to obtain a majority during one of the votes in the lower house yesterday over a new €26bn savings package. It was mainly a symbolic move (the specific vote was on a procedural act) and the package was eventually approved, but it was a reminder of the important role still played by Berlusconi’s lot.

The leader of Berlusconi’s senators, Maurizio Gasparri (in the picture), said,

Monti should display a more balanced and respectful behaviour, as the [Italian] parliament is holding one vote of confidence after the other. Sooner or later, someone may grow tired.

So for the second time in less than 24 hours, Monti was forced to apologise (although his office prefers using the word ‘clarify’). He called Berlusconi and told him he was “sorry” because that specific sentence had been “extrapolated” from a longer conversation and taken out of context.

Apologies accepted, it seems. But the episode is another reminder of how for Italy the main risk remains political.