You’re wrong, Signor Monti: National parliaments are not the problem – they’re the solution 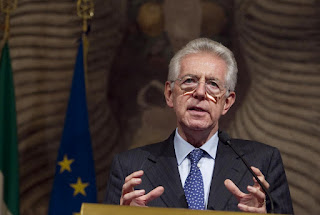 Italian Prime Minister Mario Monti has launched a diplomatic offensive in Germany, involving several interviews with the main German dailies. However, he made a faux pas while talking to German magazine Der Spiegel. Monti said,

“If governments allow themselves to be completely bound by the decisions of their parliaments without maintaining some room for manoeuvre in international negotiations, then a break-up of Europe will be more likely than closer integration.”

Excuse us? An unelected technocrat instructing national governments to ignore their parliaments? Whatever Monti tried to achieve with these remarks, it didn’t work. And he has already experienced a backlash in Germany, where if anything, there’s close to a cross-party concensus over the need for giving the Bundestag more oversight not less, in the wake of the eurozone crisis and the multi-billion euro bailouts. The various rulings handed down by the German Constitutional Court during the eurozone crisis, demanding a stronger role for the Bundestag, also shows how Monti is messing with some pretty fundamental democratic settlements (see here, here, here and here).

“Parliamentary control over European policy is out of any discussion. We need to reinforce, not weaken, democratic legitimacy in Europe.”

Alexander Dobrindt, the Secretary General of the CSU (the Bavarian sister party of Merkel’s CDU) was far less diplomatic,

“The greed for German taxpayer money is blossoming in undemocratic ways with Mr Monti…We Germans will not be prepared to eliminate democracy in order to finance Italian debts.”

The deputy leader of the opposition SPD faction in the Bundestag, Joachim Poss, suggested that the “unspeakable Berlusconi years” had undermined the image of parliament in Italy, and added,

“The acceptance of the euro and its rescue is strengthened through national parliaments and not weakened.”

The en plein of rebukes was completed by the European Commission, with spokesman Olivier Bailly saying (have they started to learn?),

“The European Commission respects the competences of national parliaments.”

All of this led Monti to clarify his stance in a communiqué:

“I just wanted to stress the need to maintain a continuous and systematic dialogue between [national] governments and parliaments, in order to make steps forward in the process of European integration.”

But Monti’s remarks give testament to a most concerning elitist mentality, which has all too often been evident in the history of European integration: democratic scrutiny is a nuisance that should be avoided wherever possible. If he thinks that the Europe that emerges from the eurozone crisis can be built on backroom deals struck between a handful of EU leaders, under the radar of national parliamentary scrutiny, he may be in for some very unpleasant surprises. Continuing down that road will result in the rise and rise of some seriously populist, anti-EU parties as voters look for alternatives. The baby will have been thrown out with the bathwater.

National democracy is not only a matter of principle but also serves a practical purpose: actions and policies that enjoy democratic legitimacy have a far greater chance of standing the test of time. Therefore, national parliaments are not the problem in the eurozone crisis, they are a big part of the solution to it.

Ironically, as he struggles to push reform measures thorugh his own parliament, Monti may soon realise just how wide of the mark his comments were.