The day after Draghi: Contrasting views from Spain and Germany 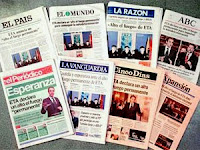 The day after the monthly meeting of the ECB’s Governing Council and Mario Draghi’s subsequent press conference – during which he said that the ECB is willing to intervene on the debt markets again but will hold fire for the moment – we’ve summed up a few media reactions from Spain and Geremany, opposite sides of the debate on what the ECB’s role in the crisis should be. The discrepancy between what the Spanish and German press have made of Draghi’s words is fascinating.

An article in El País with the headline, “Draghi pushes Spain towards another bailout” argues that:

“With a single shot, Draghi has shifted all the pressure onto [eurozone] countries verging on intervention. That is, onto Spain. Therefore, Mariano Rajoy’s government finds itself in the thorny condition of someone who has to choose between requesting a bailout – the second, after the one for [Spanish] banks less than two months ago – or burn in the markets.”

“Make no mistake. Neither is Draghi the first high-ranking European official to show Spain the way to the [eurozone] bailout funds, nor did the [Spanish] government realise yesterday that this is what it is being asked to do.”

In fact, the article goes on, other top European politicians, from EU Competition Commissioner Joaquín Almunia and Eurogroup Chairman Jean-Claude Juncker, made similar remarks over the past few weeks.

An opinion piece in another Spanish business daily, El Economista, carries the headline, “ECB to Spain: Seek a bailout”. The article says,

“The ECB is now an inoperative institution, the guardian of an ancient orthodoxy. At the moment, the ECB doesn’t want to be the solution…but is part of the problem…Spain will predictably see itself obliged to ask for a bailout. Sooner or later, the fearsome Troika (ECB, IMF and European Commission) will take the helm of our economy and our [public] accounts.”

Bernardo de Miguel, Brussels correspondent for Spanish business daily Cinco Días, writes on his blog that Draghi has made Italy and Spain a Godfather-style “offer they can’t refuse”, adding,

“Madrid and Rome have few options at their disposal, apart from Draghi’s offer, if they want to avoid a full bailout.”

Meanwhile, over in Germany, the media have focused more heavily on the implications for German taxpayers and the fraught relations between Draghi and Bundesbank President Jens Weidmann.

Mass circulation Bild, referring to the lack of concrete details announced yesterday, carries the headline, “Could…Would…Should…What does Draghi’s euro wishy-washy mean for our money?” Still, the good news for Draghi is that as long as the ECB’s ‘monetary floodgates’ remain closed, Bild have said he can keep his Pickelhaube.

Writing in Die Welt, Sebastian Jost is less complimentary towards Draghi, accusing him of “taunting” the Bundesbank. Jost argues that:

“ECB Chief Mario Draghi obviously feels comfortable in his role of the euro-saviour. However, not yet able to offer money, he had to make do with strong words and hidden side-swipes.”

An article on Handelsblatt’s frontpage asks, “How long can [Bundesbank President Jens] Weidmann hold out in isolation?”, arguing that:

“At the ECB headquarters in Frankfurt, the warnings from Germany are hardly being heard, and they clearly have no influence on decision-making.”

However, Draghi could console himself by reading FT Deutschland’s leader, entitled “Draghi’s wise plan”, which interestingly argues that:

“It would have been good not to interfere with the psychological impact of Draghi’s announcement. But once again opposition came from Germany, from the head of the Bundesbank, Jens Weidmann, apparently the only one who voted against Draghi’s plan in the Governing Council… It is indeed unwise to break the ranks of the Governing Council in this situation. Weidmann is fanning mistrust where he should be fostering confidence.”

The situation looks increasingly like another eurozone ‘game of chicken’. On the one hand, Draghi yesterday effectively urged eurozone governments (primarily Spain, but also Italy) to show their hands first –  that is, if they think they need help to bring their borrowing costs down they should request EFSF assistance. But at his press conference less than two hours ago, Spanish Prime Minister Mariano Rajoy insisted that he first wants to see what the ECB’s announced “non-standard monetary policy measures” actually involve, adding that, as regards the possibility of Madrid asking the eurozone bailout funds to buy Spanish bonds,

“I haven’t made any decision. I will do what suits the general interest of Spaniards.”

Who will blink first?