Take your pick Mario: Bond-buying or the Pickelhaube! 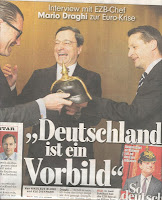 Mario Draghi’s head-wear selection could soon be smaller after Bild threatened to take back the authentic ‘Pickelhaube’ – the famous 19th Century Prussian military helmet – they bestowed upon him a few months ago to remind him of strict budgetary oversight and economic stability (see photo). Draghi responded by saying he was honoured, and that “Germany served as an example in the crisis”.

However, with more investors and politicians looking towards the ECB for salvation, Draghi has indicated that he is prepared to accept a more activist role for the ECB, pledging that, “Within our mandate, the ECB is willing to do whatever it takes to preserve the euro and, believe me, it will be enough”.

This has been widely interpreted as an announcement that the ECB will re-start buying government bonds to reduce Spain and Italy’s unsustainable borrowing costs. Today’s Süddeutsche reported that Draghi is working on a ‘dual strategy’ whereby the eurozone’s new permanent bailout fund, the ESM, would – following an official request from an affected country – buy bonds on the primary market, while the ECB would intervene on the secondary market (similar to the ‘concerted action’ described by Le Monde last week, which we discussed here).

Way too much for Bild, which today has a headline reading, “No more German money for bankrupt euro states, Herr Draghi!”, adding “or else we will take our Pickelhaube back!”

Will this threat be enough to make Draghi think twice?