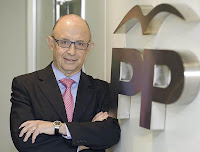 Fresh skirmishes between the Spanish government and some Spanish regions have taken place this afternoon, both ahead and during the meeting of the so-called Fiscal and Financial Policy Council – a forum for the Spanish Treasury Minister Cristóbal Montoro (pictured) to meet his regional counterparts.

The meeting is currently still under way, and the main item on the agenda is the 1.5% of GDP deficit target that Spanish regions will have to meet by the end of the year. As we argued in our recent briefing, the target seems unattainable for at least seven of Spain’s 17 Comunidades Autónomas – which are expected to make cuts worth over 2.5% of their GDP.

Despite recently having its deficit targets relaxed by the European Commission, the Spanish government has refused to do the same for its regions. Reports in the Spanish press widely suggested that today’s meeting was simply going to confirm that all regions will have to cut their deficits to 1.5% of GDP by the end of the year – even if this involves making additional budget cuts.

The government’s decision has not gone down well with certain regions – to put it mildly. Thus, Catalonia this morning decided that it would boycott the meeting altogether. In the words of the Catalan government spokesman, Francesc Homs,

There’s no point attending a meeting when everything has already been decided before.

Fair enough. But quite controversial, given that Catalonia is one of the three Spanish regions which have already declared that they will ask the central government for a bailout. Furthermore, Catalonia’s minority government, led by nationalist Convergència i Unió party, is only able to govern with external support from Spanish Prime Minister Mariano Rajoy’s Partido Popular.

And there is more. Andalusia – Spain’s most populous region along with Catalonia – did go to the meeting with Mr Montoro, but abandoned the ‘negotiating’ table in protest against the government’s decision to leave the 2012 deficit target for regions unchanged.

As we have argued here, regions will not make or break Spain financially. However, the latest events are yet another indication of how the clear difficulties in reining in spending at the regional level can undermine the Spanish government’s credibility vis-à-vis its eurozone partners and the European Commission.

P.S.: Not really a regional issue, but still related to Madrid’s credibility. The Spanish government was due to send its budgetary plans for 2013-14 to Brussels by the end of today, but has failed to do so. Perhaps not the biggest of deals, but the deadline was part of the agreement under which Spain was given an extra year to bring its deficit below 3% of GDP.