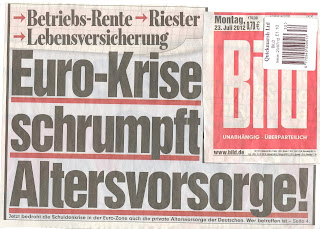 It was just a matter of time: The front page of today’s Bild warns about the effect the crisis will have on millions of Germans’ pensions.

Under the headline “Euro crisis shrinks pensions”, Bild reports that the occupational pensions of 17 million Germans are threatened by a combination of the low interest rates on the government bonds of the remaining creditworthy nations – which pension funds heavily invest in – and by the low rate of interest (0.75%) set by the ECB in an attempt to stimulate the economy, which it is feared will lead to inflation in the longer term.

In turn, the paper claims, this will erode the value of pension payments, citing calculations by Professor Stefan Homburg from the University of Hannover which show that given an inflation rate of 5%, a €1,000 pension payment would only be worth €614 in ten years’ time (although at OE we think that, given current policies, such an inflation rate is someway off).

Although there is clearly an element of scaremongering here, this is the kind of stuff that brings the crisis to life for people, and angry retirees are not a constituency that any government is advised to take lightly. It also highlights the ever-present tensions between different interest rate needs of the 17 euro economies. Sooner or later, there will be significant pressure from within Germany on the ECB to raise rates, possibly leading to a political tug of war between member states’ representatives – this seems inevitable at some point if Germany continues to outgrow other parts of the eurozone so significantly. It also shows that perversely, the record low interest rates on German sovereign debt are not wholly a positive factor for German citizens.

At the end of the day, the outcome of this crisis may be decided in large parts by its impact – be it tangible or perceived – felt by German citizens in their everyday lives.