What Cameron should have told the Telegraph 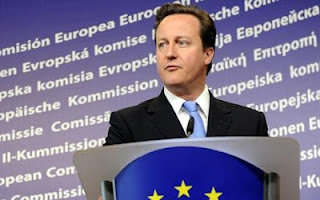 David Cameron is quoted in today’s Telegraph saying that he wants to negotiate a “new settlement” with the EU with powers returned to Britain, but that he would never campaign for an “out” vote in a referendum. “If your vision of Britain was that we should just withdraw and become a sort of greater Switzerland, I think that would be a complete denial of our national interests”, he said.

The ‘never’ part doesn’t seem to be a direct quote so it’s not entirely clear how to interpret it. However, several commentators have already laid in to Cameron over ‘revealing his negotiation hand’. In order to make demands for renegotiation credible, so the argument goes, Cameron must be willing to keep the “out” option open, in order to have a fall-back plan should negotiations fail. Otherwise, other member states have nothing to fear and can just tell the UK to go and stuff itself. A couple of things:

Having said that though, those who criticise Cameron have a point First, demands for Britain to leave are not a negotiation ploy but are real, and will intensify absent new EU membership terms. The UK government cannot be seen as defending EU membership at ‘any cost’. Secondly, as we’ve said before, if the EU becomes a political extension of the Eurozone, i.e. if directly or indirectly greater Eurozone integration spills over to Britain, for example via a banking union, Britain simply cannot remain inside – politically, democratically or economically. Finally, as we argue in our recent report on EU-UK trade, there are scenarios under which the exit door could suddenly look a lot more attractive, including if single market liberalisation stalls and if the Eurozone grows more protectionist internally and externally, preventing UK business from taking advantage of growth opportunities around the world.

Therefore, the smartest thing for Cameron to say would be: As we set out in the Tory manifesto, we remain committed to EU membership and will not seek an “Out” vote. However, we must also acknowledge that  the UK public is understandably growing more restless by the day. Absent new EU membership terms for Britain, while I personally would be against it, there may come a day, when it will no longer be possible to resist pressure for the UK leaving the EU, which would create a hugely unpredictable situation that would be in Berlin’s and Brussels’ interest to avoid.

David Cameron should frame the renegotiation of the UK’s membership terms as a bid to save the UK’s EU membership – that is a far more powerful negotiating tool than any short term threat for him to campaign to leave because, it could potentially gain support from some unexpected quarters, it is true and does not rely on the promise of a politician.