Why Sicily shows Italy still has a lot to do… 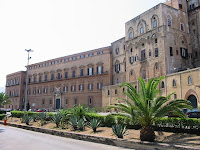 As if Mario Monti didn’t already have more than enough to work on this summer, another urgent item has taken the top spot on his agenda. The regional administration in Sicily (whose building, the beautiful Palazzo Normanni in Palermo, is pictured) is at serious risk of default. Its debt stood at a record €5.3 billion at the end of last year. The governor, Raffaele Lombardo, had already suggested that he would step down at the end of July. However, Monti felt the need to send him a letter yesterday, urging him to confirm his intention to quit. Given the shambolic state of affairs in Sicily we will overlook the fact that this essentially involves a technocrat calling on an elected politician to quit – far from ideal, but it’s clear that Lombardo has to move on.

According to the Italian press, Monti and Lombardo are planning to meet next Tuesday, with the Italian government ready to send an administrator to take control of the region from the moment the Sicilian governor resigns. This statement made by Sicily’s regional councillor for infrastructures, Andrea Vecchio, gives an idea of the gravity of the situation. He said yesterday,

Is Sicily on the verge of bankruptcy? I think so. I’m afraid we will soon no longer be able to pay the employees’ salaries.

Politically, the situation is obviously serious, but not particularly controversial. Regional autonomy in Italy is not the same thing as, for instance, in Spain. The right for the central government to step in and grab the helm if regional administrations go off course is enshrined in the Italian constitution. However, the unbelievable list of waste and mismanagement examples which led Sicily so close to default (some of which featured in our 50 examples of EU waste, 2010 edition) offers a clear explanation of why Italy still has a lot to do to find its way out of the woods of the eurozone crisis.

Courtesy of Italian journalist Sergio Rizzo – co-author with Gian Antonio Stella of the bestseller ‘La casta’ (‘The caste’ in Italian) – here are some interesting and concerning examples:

– According to the Italian Court of Auditors, the entire regional administration in Sicily employs 17,995 people. Last year, while Berlusconi’s government was piling up austerity packages, 4,857 of these employees, previously on a temporary contract, were put on a permanent one;

– In 2011, these employees cost the region over €760 million just for their salaries and allowances – 45.7% more than in 2001. If social security charges are taken into account, the cost rises to almost €1.1 billion;

– Sicily’s regional administration employs the same number of directors as 15 other Italian regions put together. This means that in the island’s administration there is on average a director for every nine employees (the average in the Presidency office is one for every five or six).

– The allowances of the 90 members of Sicily’s regional assembly include €5,000 for ‘funerary expenses’;

– Back in 1984, Sicily decided to buy two killer whales (yes, you read it right) from Iceland, at a cost to the taxpayer of over 200 million of Italian lire – i.e. over €100,000. They were supposed to be admired by tourists visiting a water park in Sciacca, in the province of Agrigento – on the south-western coast of the island. A real shame that the park was never finished and the killer whales had to spend the rest of their lives in a swimming pool, at a cost of 6 million of Italian lire – i.e. over €3,000 – a month.