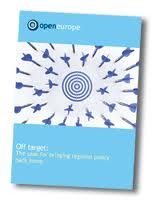 Last Friday, the Parliamentary Select Committee for Communities and Local Government‘s inquiry into the European Regional Development Fund, to which Open Europe submitted both written and oral evidence, published its final report. Among others, the report recommended that:

“We support the principle of repatriating regional policy funding, provided funding could be protected and ring-fenced over the long-term to ensure that the poorest English regions continued to receive the same level of support they would have received under the current system.”

In our recent report on the subject, Open Europe recommended that:

“Limiting EU regional spending to poorer countries [GDP below 90% of the EU average] would be a win-win situation for both Britain and Europe. It would channel more cash to the newest member states and allow the UK to spend exactly the same amount on its regions as it does now, with the option of adding the several billion that it would save from streamlining the structural funds. It would also eliminate a range of additional costs and allow the Government to radically improve the targeting of funds towards poorer areas and to viable projects.”

We are therefore delighted that MPs accepted the central tenet of our recommendations, especially as Open Europe was the only organisation profoundly critical of the status quo to submit evidence. However, we consider that there is a realistic prospect of the government being able to secure this reform in 2014 – and that the government should be prepared to veto the next MFF, currently up for negotiation, in order to make this demand more credible – whereas the Committee sees this as an objective for 2020 and beyond.

Just to briefly recap the arguments why the reform would be a win-win for the UK and Europe:

All in all, the campaign to reform EU regional policy is gathering momentum…