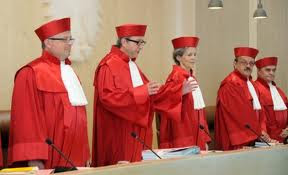 Throughout the eurozone crisis, we have often highlighted the gap between the kind of ‘shock and awe’ decisions expected by financial markets, and what national democracies are able to deliver. Nowhere has this been more evident than in the on-going constitutional tug-of-war between the German government and the country’s Constitutional Court (see here, here and here for background). The latest chapter concerns a series of legal challenges against the ESM and fiscal treaty, on the basis that they violate the sovereign budgetary rights of the German Parliament.

The stakes are very high given that the Court could, in theory, strike down the best part of Merkel and Schäuble’s efforts over the past year. It is unlikely that the Court will do so given the ramifications, but at Tuesday’s public hearing, the judges (pictured in their traditional red robes) indicated that they would take their time before issuing a ruling; up to three months to decide on whether to issue a temporary injunction pending a full decision on constitutional compatibility early next year.

This delay is most unwelcome news for Merkel who is desperate to reassure financial markets and other political leaders that Germany is serious about the eurozone rescue, which is why she expended a lot of political capital in pushing the two treaties as a package measure through the German parliament in record quick time, and was angry that after all that German President Joachim Gauck refused to give his assent after the Court asked him to allow them time to consider their legality.

The problem is that the Court was specifically designed – by the British and the Americans no less – to counteract the concentration of power and rash decision making by other federal institutions, a sort of systemic circuit breaker. It is for this reason it is tucked away in sleepy Karlsruhe, the opposite end of the country to Berlin and previously Bonn.

The question of urgency vs caution has led to deep divisions not only within the German government but also the wider political and constitutional establishment. Ahead of the proceedings, Justice Minister Sabine Leutheusser-Schnarrenberger (FDP) said that:

“Government and politicians should stay out of this completely. The Constitutional Court does not need any advice… Judges are also aware of the importance that their decision will have on the economy.”

“A considerable postponement of the ESM… could cause considerable further uncertainty on markets beyond Germany and a substantial loss of trust in the eurozone’s ability to make necessary decisions in an appropriate timeframe”.

Meanwhile the Guardian reports that Chancellor Angela Merkel allegedly told a private meeting of her CDU party that the Court was “pushing the limits” of her patience, while Martin Schulz, the President of the European Parliament complained that some of the Court’s verdicts are “characterized by great ignorance”. Conversely, Bundesbank President Jens Wiedmann, also giving evidence, warned that “a quick ratification is no guarantee that the crisis will not escalate further”.

The graphic below shows how Germany’s major political figures have found themselves at odds over the Court ruling, with figures from all parties adopting a range of positions on the issue: 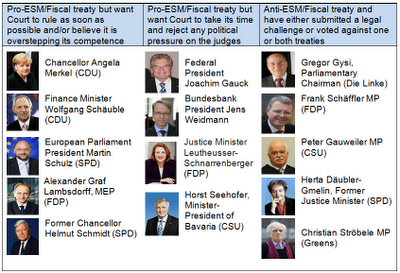 The German media on the other hand have presented a broadly united front, with Die Welt noting that the Court’s eventual ruling will determine “How far European integration can go without damaging the democratic substance of Germany”. A leader in German tabloid Bild argues that “It is totally right that the constitutional judges take more time – after all, the question is whether Germany is overburdening itself financially. That would be a lot worse than short term turbulences on the financial markets”, while in centre-left broadsheet Süddeutsche Zeitung, Heribert Prantl argues that:

“Karlsruhe has to find the ways and means by which Europe can continue to be built without breaking the foundations of the constitutional settlement. The success of this search is existentially vital for Germany and the EU. It is more important than the fleeting applause of the so-called markets in return for a quick decision.”

While the Court, even in the opinion of some of the litigants, is not expected to torpedo the eurozone rescue at this stage (although they take a slightly more pessimistic view over on FT Alphaville), the red lines of the existing constitutional settlement are looming ahead, with most forms of debt pooling that many have called for – such as Eurobonds or a banking union – lying on the opposite side. As the debate over the future of the eurozone will continue to rumble on, expect further tension in the broadly consensual model of German politics between further European integration on one hand and preserving the current constitutional settlement on the other.