A successful ECB adjustment? Not exactly…

A very technical post, so we apologise in advance, but there is an interesting debate going on regarding the ECB’s decision to cut its deposit rate to 0%.

The move essentially means that banks will no longer receive any return (previously 0.25%) for depositing money (usually excess cash) in the ECB overnight. The hope is that banks will instead lend this money out on the interbank market or use the money to purchase new assets, as they did before the financial and eurozone crises, thereby eventually boosting the level of lending to the real economy.

The past few weeks have seen a debate over what the impact of this move would be. Last night was the first night that the new rate came into effect and, as expected, the level of deposits at the ECB fell significantly – by €483bn. However, the far more important is figuring out where the money went.

As the graph below shows, the money did not in fact make its way to the interbank market or into many new assets, but simply stayed at the ECB but under another heading, ‘current account holdings’. 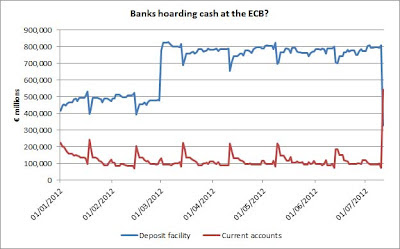 ‘Current account holdings’ refer to the main financial accounts through which banks conduct their dealings with the ECB. If they wish to access the deposit facility, funds must be transferred from the current account to this facility. Usually this is beneficial as it results in a slightly higher interest rate. However, now both accounts deliver no return.

So clearly, this money has merely been passed from one ECB account to another. That is not to say that it will not leave the ECB and that the deposit rate change will have no impact, but simply that it is yet to happen. After all this is only the first night where the new rate is in effect. That said, we are sceptical of how much impact the new lower deposit rate can actually boost lending, rather than simply boosting demand for already scarce assets (e.g. German short term debt), but we will discuss this in more detail in further posts.