In today’s Telegraph, we argue,

During Prohibition in America, the bootleggers and Baptists found themselves in an unholy alliance. One liked Prohibition for commercial reasons, the other backed it due to religious conviction. The alliance proved short-lived. A similar union has now grown up between certain Europhiles and Eurosceptics. Both say that renegotiating new EU membership terms for Britain is impossible: one group because it thinks the status quo in Europe should prevail, the other because it thinks the UK should leave the EU altogether. Both positions miss the point. 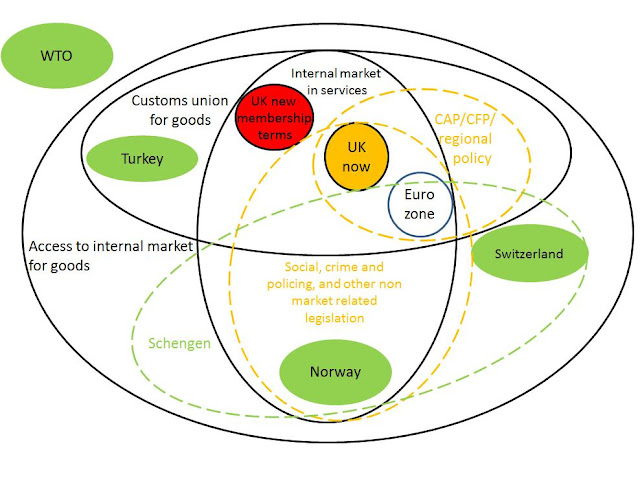 The argument the Eurosceptics make is that Britain should “become like Norway”, i.e. leave the EU and join its more detached cousin, the European Economic Area. But this would actually be a much worse deal than the existing relationship. First, Norway is almost as much of an EU member as Britain is, implementing roughly 75 per cent of all EU laws, from labour market rules (such as the working time directive) to crime and policing measures.

Second, despite being forced to accept all these laws, Oslo has no representation in the EU’s institutions and virtually no way of influencing the decision-making process to reflect its national interests. Should Britain “become like Norway”, it would be home to 36 per cent of Europe’s retail finance market, but with no say over huge swathes of regulation governing that market. And it would have to accept EU employment law – currently costing UK employers £8.6 billion a year – but with no way of influencing it. The net effect would be less opportunity to hold Brussels to account, not more.
Finally, Norwegian companies face extra costs when selling manufactured goods to Europe, stemming from the EU’s arcane “Rules of Origin”, which impose a tariff on any imports that contain components from outside the EU, and lots of extra paperwork. This has been acceptable to Norway, since 62 per cent of its goods exports come in the form of fish or natural resources, which are not affected by these rules. Applied to the UK – its car manufacturing or pharmaceuticals industries – it would bring sudden additional costs and a competitive disadvantage.
In return for its deal, Norway gets control over its farming and fishing industries. This has economic benefits and helps the country manage and maintain its heritage. But fishing and farming only account for 0.7 per cent of UK GDP. As maddening as the EU’s policies covering these two areas are, would the trade-off really be in the UK’s interests? Pursuing a “Swiss model” – based on a cobweb of bilateral agreements – might be a slightly better fit, but it would present similar problems, for example limited access to the Single Market for the UK’s large services sector.

Europhiles are equally wrong in thinking that the status quo is an option. Whether the eurozone integrates further or breaks up, the rules of the game will change. It is clear that the British public will never accept being dragged deeper into a centralised EU.

As the newly launched Fresh Start group of Tory MPs argued yesterday, Britain should set out a new vision for its place in the EU. This should allow countries to integrate with each other to different degrees. To avoid the pitfalls of the Norwegian model, Britain must not only maintain access to the internal market for goods and services, but also a vote on making the rules, and therefore remain an EU member. But it could take a pick and mix approach in other areas, including retaining its opt-in arrangement on EU policing laws, while participating in a better-targeted EU budget and some environmental measures.

As Europe goes through profound political changes in the wake of the crisis, Britain will have plenty of opportunities to advance this position, including in budget talks and future treaty negotiations, over which it will have vetoes. Once new terms have been agreed, they could confidently be put to the electorate in a referendum.

But to show he can be trusted on Europe – and to avoid a stinging defeat at the 2014 European elections at the hands of Ukip – David Cameron must get to work right away. First, in the ongoing talks over the EU’s long-term budget, he should use his veto to insist on UK economic support being limited to the poorer member states, ending the irrational redistribution of money among richer countries. This would save taxpayers billions. Second, under a loophole in EU law, he could instantly bring more than 100 crime and policing laws back under the control of MPs. Last, as the eurozone presses ahead with a “banking union”, he is right to explore safeguards against its 17 members writing rules for all 27 EU states.

Contrary to what reform-sceptics on both sides say, Britain has leverage in Europe. If the choice is between the UK leaving or getting some powers back, liberal, northern EU countries in particular may – after a lot of posturing and negotiation – go for the latter. The alternative would be losing a key ally in upholding a rules-based system of liberal trade as Europe goes through a highly defensive phase. Germany fears a Mediterranean-dominated EU as much as anyone.

Britain is one of the world’s largest economies, and therefore a major market for other member states, a huge contributor to the EU budget, a powerful military force and a global leader in finance. It lends clout and reach to the EU in world affairs. If it makes the effort, it will most certainly achieve a better deal for both itself and for Europe as a whole.