Suggested reading material for the Commission 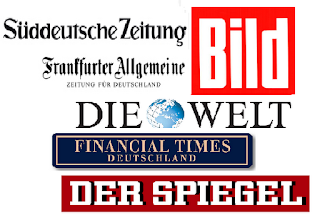 Bearing in mind that it is often said that someone’s choice of newspapers reflects their particular political prejudices, the details of the newspaper subscriptions of the EU Commission’s spokespeople, revealed by Handelsblatt’s Ruth Berschens, are very telling indeed. Ruth writes that:

“All 32 spokespeople and their deputies read the British Financial Times, at least eleven order the French Le Monde, while six order the Italian Corriere della Sera and the Spanish El País. German papers on the other hand do not reach such lofty readership heights in Brussels. Currently not a single spokesman has a subscription to for example, the widely circulated Süddeutsche Zeitung”.

Now of course, you can read a paper without a subscription and we’re sure that the Commission keeps an eye on the German debate in various different ways. Still, it’s an indication of something. While all the papers above are certainly respectable and informative, they are limited by the fact that they are all quite close to the establishment in their respective countries, and also generally afford the Commission relatively favourable coverage. Limiting your reading to the above papers will certainty not give you the widest perspective of what is really happening on the ground. There is also a great big German-sized geographical hole.

As Ruth herself goes on to point out, this leaves the Commission flying blind in the face of public opinion in the EU’s most crucial player:

“How can EU officials and European politicians understand German sensibilities, if they do not speak any German and do not consult the German media? Short summaries of German newspaper article translated into English are not enough to suddenly make eurocrats experts on Germany. The flip-side of this low sensitivity to the domestic political constraints of the federal government are the completely exaggerated expectations of Germany.”

Here are a few recent comments from the German media from the last few months that the Commission’s spokespeople may have missed:

“Eurobonds undermine confidence in the fact that we can learn any lessons from the causes of the crisis. Athens’ sloppiness and denial would be tolerated while inaction would be seen as an attractive course in other countries. Why bother with reforms, why bother to make welfare systems, labour markets and the public sector sustainable when money will just fall from the sky?”– Florian Eder, Die Welt’s Brussels correspondent, 25th May

“Hands off ‘Made in Germany’… this label is the envy of the world…Made in Brussels is the exact opposite – expensive regulations that shackle the economy.”– Prof. Ernst Elitz, founding director of Deutschlandradio, writing in Bild, 17th January

“In dealing with Member States, the European Commission is rigorous. There is no measure that is too harsh when it comes to restructuring their budgets… However, when it comes to the salaries of the 45,000 EU officials, they exercise anything but restraint – this not only damages the credibility of all savings claims, but the reputation of the EU as a whole.”– Hendrik Kafsack writing in FAZ, 2nd March

“In wanting to protect taxpayers, the UK is on the right side in the debate over bank capital rules… If Europe does not lead the way, the next crisis will again be an expensive one for taxpayers.”– Alexander Hagelücken, Süddeutsche’s economic correspondent, 4th May

While we would encourage the Commission to go directly to the source and consult as many original German newspapers as possible, they could do far worse than signing up to our daily press summary which pulls together various sources from all over Europe…and it’s free!